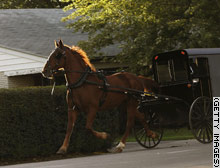 Much like the great example that John Paul II gave when he forgave his assassin, today we look to our Amish brothers and sisters who have openly forgiven the man who killed 5 Amish women in a senseless act of revenge over a 20 year grudge.

Thursday’s funerals were scheduled for Naomi Rose Ebersole, 7; Marian Fisher, 13; Mary Liz Miller, 8; and her sister Lena Miller, 7, according to The Associated Press.

Anna Mae Stoltzfus, 12, is to be buried Friday, AP reported.

Five other girls who were victims of the shooting remained hospitalized — three in critical condition and two in serious condition. They ranged in age from 6 to 13.

Roberts, 32, shot the 10 girls Monday and then committed suicide as police stormed the schoolhouse. The truck driver brought lubricating jelly and plastic restraints with him, and may have been planning to sexually assault the Amish girls, police said.

I wonder what is going through the minds of those families today and yesterday while they prepare the bodies in their home (as is their tradition) for the funeral and burial? Somehow their FIRST thought was one of peace and forgiveness.

Today let us pray that we all may be able to be inspired by their example and be able to overcome the grudges in our own lives and forgive the petty things that we encounter in our lives.