I was a big Tim Russert fan. I’m so jealous of Fr. Dave who has a picture of himself and Matt Lauer when he was on the Today Show with them. A graduate of John Carroll University in Cleveland, Russert always had much praise for the church, the Jesuits in particular. He will be missed.

I wrote this piece for BustedHalo on Friday: 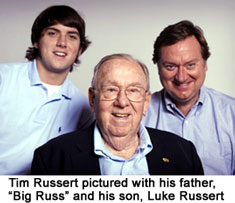 The lecture hall was packed as the crowd awaited a speaker known by millions for his enormous insight into American politics. Every Sunday, Tim Russert spoke to the titans of American politics as moderator of NBC’s “Meet the Press” where his grilling of public figures on the issues of the day had become legendary. But tonight people came from far and wide to hear him speak about a topic far more dear to him: his Father. The publication of his riveting memoir, Big Russ and Me, offered a window into the values and experiences that were at the core of this well-regarded Washington newsman’s life. The book’s success had a surprisingly large impact on the American public.

His dad, Tim Sr., a hardnosed working class guy, who worked two jobs, neither of them particularly elegant—he delivered newspapers and picked up garbage for a living—and yet Russert talked about him as the epitome of class. Big Russ taught him the values of living with faith, discipline and simple honesty. He made an honest living and family always came first. What more could a son ask for?

Throughout Russert’s life, when he saw those values reflected back to him in the people he came across like the Jesuit priests who taught him and his dad’s drinking buddies, to Senator Daniel Patrick Moynihan who Russert helped get elected in 1976, Russert drew a clear line tracing it all back to his father’s living room in Buffalo…. [More]