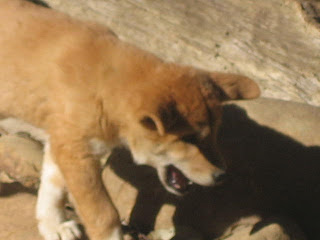 This one comes from Deacon Greg over at the Deacon’s Bench, it seems in Australia, a minister (I assume a lay person who is an extraordinary minister) refused a governmental official communion because of a recent vote on abortion. Turns out, however that the official voted against abortion in the proceedings and his wife is a pro-life lawyer. He was refused with his kids in his arms to make it even more embarrassing.

As a layman who is also a Eucharistic minister, I feel compelled to apologize to the official on behalf of all people who serve as Eucharistic Ministers. A priest, who knows him well, gave him communion on another line (good for him for going to the next queue (That’s Aussie for line!).

Here we have one more another reason not to politicize communion. It becomes selective at the whimsy of the minister and there can be times, when that minister abuses that privilege or in this case, is simply an idiot who didn’t get his facts straight. Maybe the Dingo (pictured above) ate his brain?