The White Chapel of Dachau 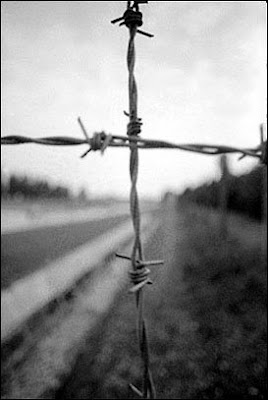 Fr James Keenan, SJ is a moral theologian at Boston College but I simply knew him as the Jesuit who lived in our dorm, who led us on retreats and who was funny and droll at dinner. He is recuperating from Cancer these days, so I ask for prayers for him–but with the talk of the holocaust these days I have been reminded of a moving story he told me once.

He was in Germany and had to go to Dachau. It occured to him that for the people who live in Dachau it had to be embarrassing. I mean who in their right mind would want a city that was known for the concentration camps to be their home? Why would anyone freely choose to live there?

He went and visited the camps and was moved and angered by what he saw. He needed to pray, but upon finding the church nearby, he was turned away by an angry nun who had told him firmly that the church was closed and then slammed the door in his face.

As he began his walk back to his train, he caught sight in the distance of a small white chapel. He walked to that chapel and when he entered in, he found something that moved him to tears.

Above the altar was Christ in a cruciform–though he was not nailed to wood, rather he hung on barbed wires.

It seems the people of Dachau could not forget what had happened there and indeed had appropriated the horror of what happened into their need for prayer, their need to pray for an end to such madness. And it was in that prayer and in seeing the atrocities of Dachau that they met the living God, the one who suffers with his creation.

May their lesson and their prayer continue for all of us today.