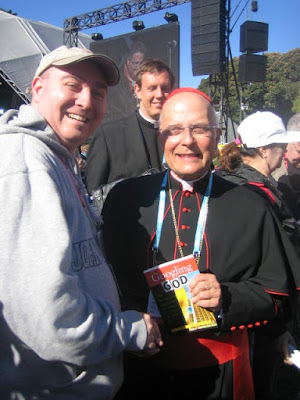 Cardinal Francis George, USCCB President and friend of Googling God made this statement on the recent SSPX shenanigans and Bishop Williamson.

Pope Benedict XVI has lifted the personal penalty of excommunication incurred by four schismatic bishops belonging to the Priestly Society of Saint Pius X, founded by the late Archbishop Marcel Lefebvre. This gesture on the part of the Holy Father was an act of mercy and personal concern for the ordained and lay members of this Society and was meant to coincide with the fiftieth commemoration of the convening of the Second Vatican Council.

The Holy Father’s lifting of the excommunications is but a first step toward receiving these four bishops, and the priests who serve under them, back into full communion with the Catholic Church. If these bishops are to exercise their ministry as true teachers and pastors of the Catholic Church, they, like all Catholic bishops, will have to give their assent to all that the Church professes, including the teachings of the Second Vatican Council.

As is now widely known, one of the four bishops, Richard Williamson, has recently made some deeply offensive and utterly false statements about the Holocaust of the Second World War. Bishop Williamson has denied historical facts about the Shoah, in which six million Jews were cruelly annihilated, innocent victims of blind racial and religious hatred. These comments have evoked understandable outrage from within the Jewish community and also from among our own Catholic people. No Catholic, whether lay person, priest or bishop can ever negate the memory of the Shoah, just as no Catholic should ever tolerate expressions of anti-Semitism and religious bigotry.

I make my own the words of the Holy Father spoken at the General Audience on January 28, 2009: “[May] the Shoah show both old and new generations that only the arduous path of listening and dialogue, of love and forgiveness, can lead peoples, cultures and religions of the world to the longed-for goal of fraternity and peace, in truth. May violence never again humiliate man’s dignity.” We Catholic bishops in the United States are as committed as ever to building bonds of trust and mutual understanding with our elder brothers and sisters, the Jewish people, so that together with them we may be a blessing to the world.