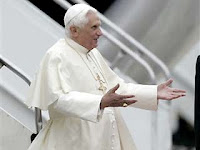 Just in from Zenit

Benedict XVI expressed his profound sorrow over the death of two girls trampled by the crowd, which also left some 90 wounded, in the incident that took place outside Luanda’s Coqueiros Stadium, where soon afterward the meeting with young Congolese was to be held.

“I have prayed, and pray for them,” said the Pontiff.

The Holy Father also recalled the meeting Thursday with the sick in Yaoundé’s Cardinal Paul-Émile Léger Center, a rehabilitation center for people with disabilities, founded in 1972 by the Canadian cardinal after whom it is named.

“It touched my heart to see here the world of the many sufferings, of all suffering, the sadness, the poverty of human existence, but also to see how the state and Church collaborate to help those who suffer,” commented the Pope.

“And one sees, it seems to me, that when a man helps one who suffers he is more of a man, the world becomes more human: This is engraved in my memory,” he added.