The Anchoress on Obama and Fire Breathing Pro-lifers 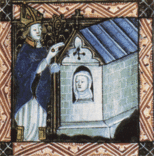 A hat tip to Deacon Greg and Pajamas Media

For many pro-life Catholics, myself included, the thought of President Obama addressing the upcoming commencement exercises at Notre Dame just scalds.

It scalds, but as my email fills up with angry press releases from various pro-life groups and with appeals to sign anti-Obama petitions, I find all the fire-breathing just a bit scalding, as well.

I understand and support the duty of Catholic bishops to register strong disapproval of the president’s anti-life positions, and I further believe that teaching the truth is always imperative, but Catholic universities have never been intellectual ghettos, offering only narrow exposure to ideas. On the contrary, Catholic universities have been bastions of rigorous debate with the application of reason triumphant over trends, sentiments, or policies. Because I believe that, and because I believe in the rightness of the Catholic position on life and the ability of the Holy Spirit to use surprising people and circumstances to do God’s will, I keep thinking, “Why are the Catholics approaching all of this with outrage and apparent fear, instead of confidence in battle?”

The current administration has famously quipped “never let a good crisis go to waste.” Well, Catholics might take a page from the president’s book and see this situation as less a “crisis” than an opportunity.

Read some more comments from her here