Father “What a Waste” 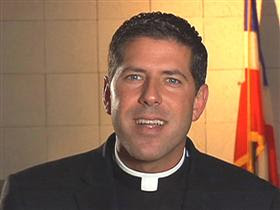 Sad to see that one of our popular “media priests” has been removed from ministry.

From the Miami Herald

The Rev. Alberto Cutié, a national figure with movie star looks, was removed from his Miami Beach church Tuesday after photographs appeared in a magazine showing him frolicking with a woman in the sand on a Florida beach.

Word of Cutié’s punishment came during a brief news conference in front of a small gathering of reporters at the Archdiocese of Miami headquarters on Biscayne Boulevard in Miami Shores.

”The vow of celibacy is part of the ordination,” said spokeswoman Mary Ross Agosta. “A man who is a priest is able to totally focus on the church.”

Earlier in the day, Cutié spoke with Archbishop John C. Favalora, who said that the pictures of Cutié and the woman saddened him.

”Father Cutié’s actions cannot be condoned despite the good works he has done as a priest,” Favalora said in a statement. “I ask for everyone’s prayers at this time.”

I see a lot of people calling for optional celibacy here. But that’s not the point, I think. The point is that Fr Cutie (you can’t make these names up) broke his vows and that we need to be able to see him as a fallible human being. Perhaps it doesn’t mean that he can return to ministry until he can be assured that he can live a celibate life but I think there’s a more systemic problem here with priests who break their celibacy vow.

Cutie himself hints at what could be the issue at hand in his apology posted on his website:

Before God – full of love and mercy – I ask for the forgiveness of those who may be hurt or saddened by my actions. Since I entered the seminary at the age of 18, the priesthood has brought me great joy. The commitment that I made to serve God will remain intact. I am grateful for the love and support I have received today from so many in our community, especially my parishioners and the supporters of the radio stations who have demonstrated great compassion and understanding toward me as a human being. I ask for your continued prayers and support.

He entered the seminary at the age of 18! While admirable, I often wonder if it’s healthy for some (not all) men to enter seminary so young? This point of our development as a person really involves getting to know ourselves more deeply. I know I learned so much about myself in college and especially learned that I wanted to be married. At 18, I find it difficult to think that most people are ready to enter into a lifelong commitment to ANYTHING much less, a celibate priesthood. I’d like to think that Padre Alberto simply may not have figured out how to deal with amorous feelings nor what to do about them when they arise.

A good friend of mine said one time that one of the questions that was asked of him when he started in seminary was: “What are you going to do WHEN you fall in love?” Not even an “if” was mentioned in that question. I think that’s something for all priests and religious to ask themselves and to address with a spiritual director and much like an alcoholic would call a sponsor, perhaps a similar relationship with a confessor or spiritual director needs to take place? As a married person, even living a monogamous life can be challenging, especially for those of us who are in the public eye. We may be more attractive to others because of our confidence, or our bravado, or our wit. Fr. Cutie is an incredibly good-looking man and undoubtedly he becomes the proverbial “forbidden fruit.” That can’t be easy. But perhaps he may not have been equipped to handle such pressure and succumbed to it? Who knows? Perhaps he may also have an issue with power relationships and found easy prey in a woman who wanted his attention and affection? Again, nobody knows.

My thought is that he needs our prayers and a good director who may be able to help him live his priesthood in a authentic way. So say a prayer today that Fr Cutie may indeed be at peace with whatever decision comes to him with the guidance of the holy spirit and his superiors.

0 thoughts on “Father “What a Waste””