More on President Obama and Abortion 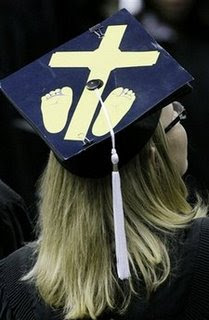 So I’ve heard tons of comments online and in person with the new buzzword: President Obama is the biggest pro-abortion President in the history of our country.

Well, that wouldn’t be hard since there’s only 8 to choose from… let’s also remember that in 1973 the President was a Republican.

But let’s also think about something else. President Obama may indeed uphold the right of women to seek abortions, but what he also said yesterday is that nobody makes those decisions lightly. And that’s where we as Catholics come in.

At some point, a woman makes a choice to abort, it’s that window where we have an opportunity to present other options despite the fact that the law tells her that she can just kill her baby growing in the womb. Are those options presented to her in ways that don’t place undo pressure on her? Do they seem overly coercive or do they seem like sincere care and love? I fear that most often alternatives are presented as the former and not the latter.

President Obama, however short-sighted his view on the law may be, did have one very valuable point that we need to listen to:

“Let’s work together to reduce the number of abortions.”

Think about what that statement says:

Women have other choices than abortion, better choices. They just think that they can’t choose them for whatever reason. The main one is that they feel they have no support. The issue here is that Republicans most often think that these women should pull themselves up by their own bootstraps, from their family or from the church rather than get help from the government. They think women will abuse the system and get pregnant to get more welfare money.

Fair enough. Some will most certainly abuse the system, but does that mean we make overarching rules for the exceptions?
Are we really motivated by love when we think that way?

But no matter, welfare is not and can not be the only solution–perhaps not even the main one. What are we doing as Catholics to lobby for the care of women seeking abortion? If President Obama is serious about helping us reduce the number of abortions, then at least we’re on the same page in SOME way. It also means that if we present a plan to put bigger and better pregnancy crisis centers in cities all over the country, we should be able to gain some support from the Obama administration.

The sisters of life are one group I know who does lots. Malta House in Connecticut is another good model. But there aren’t enough of these models out there. Why is every parish in the United States not saying, we’ll go an live in a tent so that these women can bring their children to term? Why is the outreach so minimal when it comes to offering to help these women?

President Obama seems to be saying some magic words to us and instead we are spitting venom back at him with our mantra of “most pro-abortion president”. The magic words are “Let’s work together to help these women not choose abortion to begin with.” If we help them not make the choice to abort at least we’ll save somebody, perhaps more than a majority begin to choose life–then we will be very successful at reducing abortions.

Women who abort despite these efforts are probably going to do it anyway. And if the law was not present they’d still find a way to do it illegally. I think that’s the big fear from the majority of the pro-choice camp. They think that women who can’t be convinced of the moral conviction that we hold dearly, are going to be placed in harm’s way. While we value life in the womb, we also value life outside of the womb and sometimes we will lose one of those battles here. It’s sad but even if the law were repealed, we’d still lose babies and we’d lose a few women along the way as well. Some people remain lost.

But the pro-life camp, of which I consider myself part of, also has its shortsightedness. They have an all or nothing approach. Now obviously our work isn’t done until we eliminate abortion entirely, but shouldn’t we also at least take small victories where we can get them. We seemed to do this with President Bush when he outlawed partial-birth abortion. We didn’t have an all or nothing approach there did we?

So the larger question is: Are President Obama’s efforts not welcome, even though he is much more vocal than previous Presidents about limiting abortion–where other Presidents would merely state that they would not limit a woman’s right to choose. While we may not agree with him that these issues are complex (for us murder is murder in our view), we need to at least acknowledge that he sees some room in working alongside us.

Or we can just parrot back mantras.

0 thoughts on “More on President Obama and Abortion”