All God’s Creatures, Praise the Lord 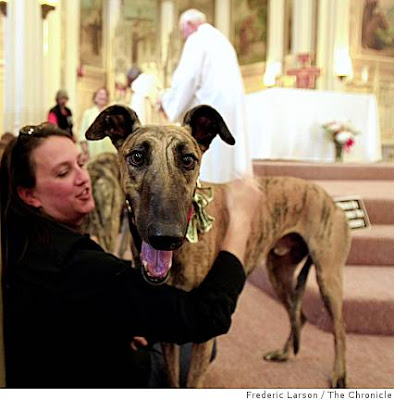 While the blessing of the animals usually falls on the feast day of St Francis, in San Francisco, that’s not always the case.

Clad in flowing golden robes, Deacon Charles McNeil read from Genesis and then sprinkled holy water on the drooling, panting worshipers. Some barked. Others sniffed their fellow supplicants. A German shepherd shook his head, spraying his neighbors with holy water.

The event, in its 15th or so year, was a highlight of the North Beach Festival, which continues today. In addition to bringing pets to church, festivalgoers could watch artists draw chalk masterpieces on Vallejo Street, eat Italian sausages, and drink beer at Washington Square.

Another dog in need of spiritual serenity Saturday was Alex, a rambunctious pit bull mix who was recently neutered.

“He wasn’t too happy about it. His voice changed,” said his owner, Fernando Arocha of San Francisco. “Is he Catholic? He will be after today.”

After blessing the dogs and cats, McNeil said a prayer for those that had ascended to pet heaven in the past year. The prayer reminded him of his beloved childhood Chihuahua mix, Corky.

“Corky loved carrots, and he loved people,” McNeil said after the ceremony ended. “He’d sneak out every day and go to the McDonald’s on Ocean Avenue. He was the smartest dog I ever knew.”

McNeil said the annual pet blessing is a chance for pet owners to take the love they feel toward Rover and Snowball and extend it toward humanity at large. People should feel as much compassion for homeless people in the Tenderloin as they feel for homeless puppies at the SPCA, he said.

“People always think of St. Francis preaching to the birds,” he said. “But he didn’t just have a love of animals. It went beyond that. My hope is that somehow the people here today carry that same sense of respect out into the world.”

Check out the pics here at this link

As many of you know I’m obsessed with my dog, Haze, a Chihuahua. You can check him out at his own blog which he types as fast as his little paws can go here