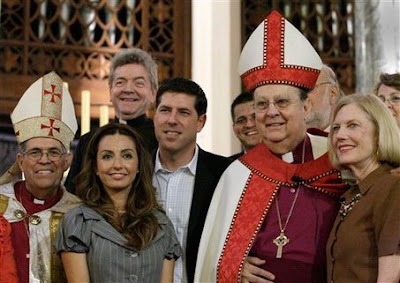 From the Miami Herald: Fr Alberto Cutie weds his girlfriend of two years in the Episcopal Church. While this guy is saying that he doesn’t want to be the poster boy for optional celibacy that seems to be exactly what he is becoming. Check the video below at this link which would be so much better if the Miami Herald would get with the program and allow embeds.

More from the article:

In an hourlong, private ceremony, Cutié, 40, said ”I do” and kissed the new Mrs. Cutié at the historic St. Bernard de Clairvaux Episcopal Church in North Miami Beach. The couple, who dated for two years, then danced at a reception that followed late into the night.

A handful of private guards and several North Miami Beach police cruisers were on watch at the church gate as Episcopal church priests, the couple’s families and friends, were ushered in.

Clad in a white dress, Canellis arrived at 7 p.m. in a black stretch limo with tinted windows. Bridesmaids in dark red dresses sat by her side. Donning a black tuxedo, Cutié arrived in a black SUV.

Dozens of reporters from local and international media staked out the church grounds in addition to many local residents aching to see the famous couple.

”I don’t like the way Alberto has handled himself,” said Maria Rivas, 62, of North Miami Beach, who had heard reports about the wedding and rushed to the church to try to get in.

”It’s a free world,” remarked Victor Gutierrez, 49, of North Miami Beach. Let them have fun and be happy.”

Cutié legally married Canellis before a Miami-Dade County judge in a private ceremony at the Coral Gables courthouse on June 16th. The couple had joined the Episcopal church in late May, and Cutié announced he had begun the process required to become an Episcopal priest.

Cutié left his post at St. Francis de Sales Catholic Church in Miami Beach on May 5th after a Spanish-language celebrity magazine published photos of him entwined with Canellis on a Florida beach, a violation of his vow of celibacy as a Catholic priest.

With its lush greenery and Gothic architecture, St. Bernard de Clairvaux, commonly referred to locally as the Spanish Monastery, is one of the most popular spots in South Florida for weddings and photo shoots.

A h/t to the Deacon for this info.