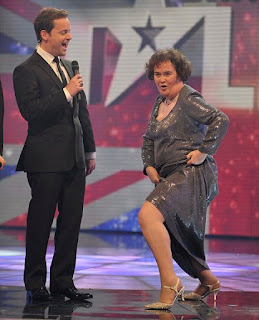 Is fame too much for Susan Boyle? Apparently it is at least taking its toll on the dowdy diva.

The producers of Britain’s Got Talent are facing an investigation over their treatment of contestant Susan Boyle after she was admitted to The Priory clinic suffering exhaustion.

Media regulator Ofcom is considering launching an inquiry after receiving ‘a large number of complaints’ from viewers of the hit ITV programme.

The show’s bosses have come under fire for not withdrawing her from the contest after it emerged she had not been sleeping or eating properly in the week leading up to Saturday’s final.

A source from the watchdog told London’s Evening Standard: ‘There are a lot to go through. There are complaints about Susan Boyle being allowed to perform in the final.’

Police were summoned to her hotel following her shock loss to dance troupe Diversity and the 48-year-old was assessed under the Mental Health Act after she had an ’emotional breakdown’.

It gives more credence to those who said she’d have a hard time dealing with the fame–and she didn’t even win. Those of us who have worked closely with mentally challenged people of different types probably saw something like this coming. It doesn’t mean that Susan can’t be a singing star but it does mean that she needs good handlers–people who will be able to keep the limelight shining while allowing her to maintain some reclusive moments to escape the pressure of the public life.

When you’re a “star” everyone thinks they know you and that you have time for everyone that comes your way–and moreover, that you owe them a moment. If you don’t give them a moment or engage them then you’re “the bigshot who didn’t have time for the little people.” It’s a hopelessly impossible situation. You are balancing some kind of privacy with a public personna–and most people just don’t get it.

Even small time fame has broad strokes of troublesome times. My college roommate was on MTV’s Real World (Joe, from the Miami series–and I’m not answering any more questions about him) and I had a hard time walking down the street with him in nearly any city where he wasn’t recognized by someone who wanted to know 10 questions about the show. It was frankly annoying–even for me. College friends would even stop and merely ask him questions about the show and not about anything else and even worse would ignore anyone else who was with him in lieu of getting more “inside information”. A good friend once didn’t even notice I was standing next to him one day and apologized once he jumped out of the “star stupor.”

Some will certainly look at the likes of these reality and game show superstars and say “Oh wah-wah you’re life is so hard! You sing and get paid for it.” Or “You were on TV and it ruined your personal life.” And I think there’s some wisdom and truth to their criticism because after all, they did want this kind of fame and public recognition and the mistake is not thinking about the boundaries that you’d have to set up once fame sets in.

However, the real issue is that most likely fame is thrust upon unlikely people–like Susan. And fame moves very quickly and the pressure mounts even faster. Who is going to pick up the pieces when fame rears its ugly head on someone unprepared for the pressure it foists?