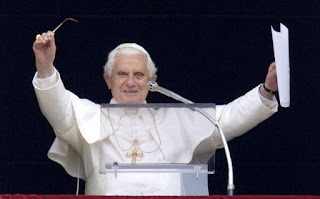 John Allen has the scoop as usual!

Rome
In what could be seen as another piece of fallout from Benedict XVI’s January decision to lift the excommunications of four traditionalist bishops, including one who is a Holocaust denier, the pope today restructured the Vatican office that handles relations with the traditionalist world — and, in effect, gently fired the officials who presided over the earlier fiasco.

As a result of a document issued by the Vatican today, titled Ecclesiae unitatem, Colombian Cardinal Dario Castrillon-Hoyos, who had served as President of the Ecclesia Dei Commission since 2000, and Italian Monsignor Camille Perl, the number two official at Ecclesia Dei, are both out of work. The Ecclesia Dei Commission was created by the late Pope John Paul II in 1988 to manage relations with the Society of St. Pius X founded by the late French Archbishop Marcel Lefebvre.

Both men played key roles in the decision to lift the ecxcommunications, including that of Bishop Richard Williamson, the traditionalist prelate who denied in an interview with Swedish television that the Nazis had used gas chambers and that six million Jews had died in the Holocaust.

The so-called “Lefebvrites” rejected many of the reforms associated with the Second Vatican Council (1962-65). Most prominently, traditionalists clung to the pre-Vatican II Mass in Latin, but many also have voiced objections to the council’s teachings on ecumenism, inter-faith dialogue and religious freedom.

In broad strokes, the restructuring announced today is seen by most observers as a sign that the Vatican intends to take a more careful, and perhaps a bit firmer, hand in its dealings with traditionalist Catholics.

Issued as a motu proprio, meaning an exercise of the pope’s personal authority under canon law, Ecclesiae unitatem brings the Ecclesia Dei Commission under the supervision of the Congregation for the Doctrine of the Faith, the Vatican’s top doctrinal agency. That means ultimate responsibility for the church’s relationship with the traditionalists will belong to American Cardinal William Levada, prefect of the doctrinal congregation.

The Vatican also announced today that the new secretary of the Ecclesia Dei Commission will be Italian Monsignor Guido Pozzo, 57, formerly an official in the Congregation for the Doctrine of the Faith and deputy secretary of the International Theological Commission, an advisory body to the doctrinal congregation.

Levada released a statement today stipulating that as far as the Lefebvrite movement is concerned, “the doctrinal questions remain open. Until they’re clarified, Levada’s statement said, the ‘Society of St. Pius X’ cannot enjoy any canonical status within the church, and its ministers do not exercise in a legitimate way any ministry within the church.”

Although the Vatican issued a similar statement at the time of the controversy surrounding Williamson, today’s repetition from Levada makes clear anew that the lifting of the excommunications in January does not mean that the Lefebvrite bishops are fully “rehabilitated.”

Now for those of you offended at first glace at the Pope’s attempt at reconciling these folks–shout this move just as loudly as you shouted your outrage.

Why do I have feeling that I’ll only hear the words: “It’s about time!”