Legionaries of Christ: Long road ahead 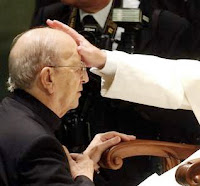 As the Vatican begins an unprecedented investigation into the Legionaries of Christ, a once-powerful religious order whose late founder has been discredited for living a “double life,” it remains to be seen how the order’s local operations will be affected.

Lawyers for the Legion recently notified the town of Mount Pleasant that plans for a university in Thornwood will likely be scaled back.

In addition, the order hopes to expand activities at a retreat center in New Castle after last year withdrawing decade-old plans for a seminary.

Still, it is hard to know how the urgent and potentially debilitating challenges facing the Legion, an order known for its secrecy, might be coloring its day-to-day operations.

“I suspect they are scrambling to do anything that makes them look mainstream and not cultish,” said Jason Berry, a New Orleans-based writer who first made public in 1997 accusations that former seminarians were sexually abused by the Rev. Marcial Maciel, who founded the Legion in Mexico in 1941.

Pope John Paul II, a strong supporter of Maciel and the Legion, would not address the allegations. But in May 2006, 13 months after the election of Pope Benedict XVI, the Vatican announced Maciel would lead a “life of prayer and penance, renouncing every public ministry.” Maciel died in January 2008.

Then early this year, word began to spread that the Legion had discovered Maciel fathered a child and led something of a double life. The Vatican announced it would begin a rare “apostolic visitation” on July 15 – assigning five bishops to investigate the Legion’s worldwide operations.

Denver Archbishop Charles Chaput will look into the Legion’s U.S. operations, based out of Cheshire, CT.

I’ve had few experiences with the Legion but I was very impressed by the guys I met from the Legion out on the West Coast in the Diocese of San Jose. Members of the Legion I’ve met in other places seemed to be less friendly and more hostile to anybody who was even middle of the road in their theology.

Today let’s pray for these men who have dedicated their lives to God and that the truth about the Legion comes to light and helps them weed out those who are unhealthy and not suitable for ministry and that the good men amongst them will be able to recover from this difficult time. Pray too for those men struggling with who they are and perhaps with the lives they have been living.

0 thoughts on “Legionaries of Christ: Long road ahead”