Life’s Not Always a Day at the Beach 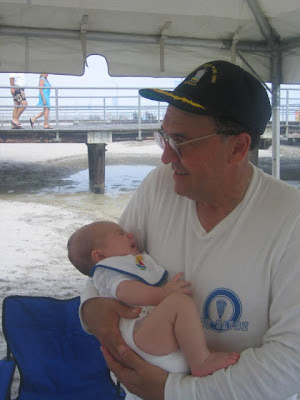 I just got back from the family beach party…

OK, it’s my wife’s family, the family I married into but they are also a family that has always treated me as one of their own.

They are a large Italian family and they “Let Irish people in the family once in awhile,” according to my wife’s Uncle Louis (Pictured here with Dominic, the newest member of the clan and Uncle Louis’ grandson).

It’s nice that we can all get together even in the midst of the hot and busy summer. We get to learn about each other’s summer trips, the usual family happenings and more serious matters like illnesses or job troubles.

But the reading that will capture everyone’s attention this weekend is the famed passage from Paul’s letter to the Ephesians where he says “Wives be subordinate (or submissive in some translations) to your husband.”

I usually nudge my wife at that juncture to make sure she’s paying attention.

But we need to put the reading into proper context for us to really understand it. For to be subordinate to someone else means to put their needs ahead of your own. At the time of Paul’s writing, the Jewish people were oppressed by the Romans. The Romans enslaved the Jews and treated them as sub-human. It was a tough time for the men of a Jewish household to get up and go to work each day and be treated like dirt. To come home with the embarrassment of being treated that way, averting their eyes in shame at being essentially a slave.

And it was tougher for their wives to watch them. And the big temptation for the wives was to pile on the abuse with self deprecating remarks.

“Look at this canker sore of a man that I married. Oh woe is me to be married to a man who can’t even stand up for himself. If these men would just be men and revolt against the Romans we’d all be better off. But there’s a better chance of pigs (well maybe not pigs, Kosher and all! Let’s say dogs maybe!) flying!”

And Paul states simply that wives should avoid this temptation, to be subordinate to this man who they can’t seem to respect. That when it’s hard to respect your husband and you think that he is a slug, that you need to subordinate those feelings to care for a guy who has just been beaten down by life.

In turn, Paul also cautions husbands to love these wives as well. After all, they are traveling a tough road together. And that the most important thing is to stay together being subordinate to each other. Forgiving one another of their faults, of their own pre-conceived notions of each other, of their expectations of the way life should be in favor of accepting to live their lives together, come what may.

Jesus in today’s Gospel is looking for the Disciples to accept him fully and completely even though his “sayings are difficult.” For some the life Jesus was describing was strange and weird and maybe a bit too counter-cultural.

“How can this man give us his flesh to eat?”

But the message running throughout all the readings is really about having faith. The faith that keeps us together as one unit. Just as families stick together in tough times, just as husbands and wives stay together even though they know each other’s faults, just as Catholics and members of other faith traditons stick together even when the world tells us we are foolish to believe in God and in one another.

It is not easy to stay together, not every day is like my family’s day at the beach. We all will face hardships in life. Job loss, sickness, disagreements and even death. But the example that my wife’s family gives to us, is that we need to stick together. That’s something that I’ve really come to value in this new family and have not always seen in my own family at times.

But the lesson goes further.

Jesus tells His disciples that family has to expand beyond blood ties to all of humanity. Jesus calls us to stick together despite all the world’s hatred. There are may people who we forget about and who fall by the wayside. We must stick together with the homeless, with the elderly, with the children in and out of the womb who need our protection and with all of those who need our assistance.

Jesus’ “hard sayings” tell us that we even have to stick it out with those that hate us. We need to love our enemies; those don’t do their part in trying to stick it out with us. That indeed is one of the hardest things to do–to stay in relationship with someone who thinks that you’re not worth it. To pray for those who persecute us.

It’s a call to family. And when we realize that we are all family, and start treating all people as if they were brother and sister and cousin and aunt, we’ll call that the day The Kingdom of God is a reality.

And as great as my weekend with the family was, this will be a lot better than a great day at the beach!