O Lord, Let Me Not Take You For Granted 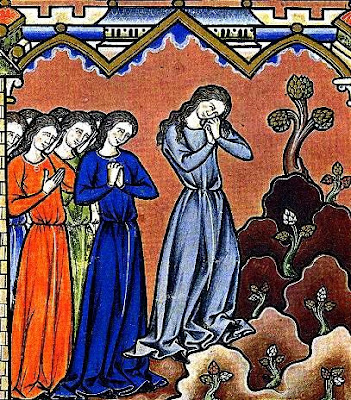 In today’s readings for Mass I found myself horrified at the violence that exists in these dreadful readings.

First Jephthah vows to sacrifice the first person who walks through his door as a holocaust to God in exchange for victory in war. When that person ends up to be his only daughter, my horror begins and grows when Jephthah actually does offer her as sacrifice. And while we don’t have evidence that God accepts Jephthah’s daughter as sacrifice, there’s not any evidence to suggest that He doesn’t either.

Then later in the Gospel, we hear of a prince’s wedding feast where the invited guests choose not to attend. Some of them even take his father, the King’s servants, and kill them. In response, the king murders them and burns the city to the ground.

Then the king invites anyone who would come and chastises a man for not wearing a wedding garment and has him thrown out.

It’s not a cheery summertime set of readings, is it?

But scripture often has a way of making a point to us that goes beyond the details of these stories. The irony of the first reading calls me to look at something that I often try to do. I try to control God.

How many times did I offer that kind of prayer, as if God were some kind of bargain basement swap shop?

God doesn’t require bargaining. God requires our fidelity. And when we mix these two things together we get horrible results for all involved.

To further the point the murderous King is upset because people took his invitation for granted. Perhaps they opted for a better deal, or found someone else that they’d rather hang out with, or even just were too lazy to care to respond?

God calls me often to places that I may even be uncomfortable in and it is there that I often put up the roadblocks.

“Nah. I’d rather stay home in my nice air conditioned apartment than go to help at the homeless shelter.”

“Nope. I’m going to pass by that person who always needs my attention.”

“I know my wife needs me to listen to her right now, but I’m just going to ignore that invitation because the game is on.”

Sometimes it’s even a chore to get dressed for mass, isn’t it? And when we’re caught unprepared like that…it’s mostly because we hadn’t been paying attention all along.

Today I pray, that I don’t take God for granted. That I take some time each day to be grateful, one of the centerpieces of the Christian life. God has given me much and gifted me with much to give. May I use that grace to praise His name both now and forever. Amen.

0 thoughts on “O Lord, Let Me Not Take You For Granted”