Mass Etiquette: When babies cry at mass I want to…. 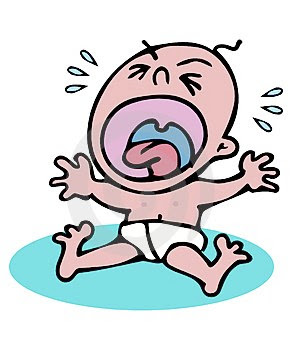 Deacon Greg gets a major hat tip for this one that I will now turn into a series of shoulds and shouldn’ts at mass. These will come complete with stories of real events that happened at mass and the resulting fallout from the event.

What Father says, “Please, be mindful of your children during Mass. We have a cry room.” What parents hear: “Your kids are disruptive brats and you cannot control them. They have no place at Mass, so why do you insist on ruining our prayer with these public displays of your failed parenting? Go somewhere else!”

I probably agree with Father here that parents are certainly resentful of priests who point out how their children are being a disturbance. I would also say that if we are really about being pro-life, a crying baby should be music to our ears. A family’s presence at mass should indeed be a celebration for us all.

I do like the idea of a cry room for noisy babies. It’s not a room that people should opt to sit in at mass simply because they have a baby. It should be a place that people CAN go to WHEN their child starts screaming and wailing and is becoming a disturbance. I would also note that parents wouldn’t bring a crying baby into a show at a Broadway theatre–but they are often pretty much OK with having them be a disturbance at mass. That seems to be inconsistent to me.

The “rambunctious child” who should know better is more of my concern. I’ve seen this more often. A kid who simply is not engaged and doesn’t sit still during mass. They are probably 2 or 3 and they are often given everything to play with from keys to racecars to coloring books. Granted mass is not exactly a Sesame Street production that might hold their attention (especially in certain parishes!) but I do think that a parent can whisper to a child to teach them what is happening without it being much of a disturbance. My own mother often taught me to read during mass by having me listen to the priest’s words and following along in the missalette.

“Father” and even “lay minister” should be pastorally sensitive to parents at all costs. We should consider what it took for this family to get their children fed, dressed, looking presentable, avoiding meltdowns and traffic jams to get to mass. Here is perhaps the worst story I have ever heard:

A priest in a parish that I won’t name was preaching his homily. A woman was seated near the front with her 4 young boys all close in age, say 7, 5, 3, and an infant in her arms. Her boys (as they will tend to do) began to get rambunctious during mass. One would punch the other in the arm only to be kicked back. The other would kick the kneeler. The baby spit up. This young mother had all she could do to maintain order. Any parent can probably relate. The boys would indeed listen to her when she told them to cut it out but there was certainly a constant need for her scolding them or centering them back on the mass.

At one point mother snapped her fingers at the boys and leaned over to them, kissed one on the head and pulled him closer to her to keep him from killing his little brother. At that juncture the priest on the altar screamed out one word: “YOU!” and he pointed his finger right at the woman.

“YOU ARE A TERRIBLE MOTHER! NOW TAKE THOSE KIDS AND GET OUT OF HERE AND DON’T COME BACK UNTIL THEY ARE BETTER BEHAVED! I have worked very hard on this homily all week and your children are disturbing the entire parish!”

Yikes! Father, you might want to try the decaf. I doubt that they were disturbing anyone except maybe a few nearby parishioners who seemed to be more sympathetic to their cause than anything else.

The mother started up the aisle with kids in tow, eyes downcast. Over 20 parishioners walked out with her in protest of the priest’s arrogance and found the next parish up the block to be much more accommodating to this young lady and her kids.

If I were pastor (and I’m not) I would state at the beginning of mass just “How wonderful it is to see so many families at mass. We are a parish that welcomes all people and how blessed we are to see the children here with their parents. Just one logistical item, we don’t want to lose your presence here so we have constructed a cry room for children that become too rambunctious or who start crying. We don’t encourage you to sit there throughout the entire mass, nor do we wish to exile you there. HOWEVER, if it is obvious to you and to those around you that baby or child is simply too noisy or is in the midst of a meltdown please feel free to take them to the crying room until they can calm down and more peacefully and comfortably sit amongst the congregation.

As laity, I think we also have a responsibility to help young parents. Maybe grabbing the diaper bag from them when they have their hands full? Maybe offering to baby sit for them so they can have a respite for themselves? Maybe bringing them some water or offering to help them with some other matter? We are a community of faith and that means we need to be concerned for the needs of all–babies included.

This is really all about courtesy in my opinion, from all sides. What do you think? When babies cry at mass what do you want to do or wish would happen?

Wanna be my Mass Buddy?

New Translations: Got It Down Yet?