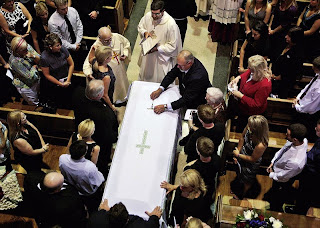 I have attended many funerals of family members and friends and even served a bunch of funerals and wakes as an altar server or some other ministerial role. I think I’ve heard it all. People can be really awkward at funerals. They just have no words and don’t know what to say when another’s loved one dies because there really are no words that can remove the pain that another feels. What people really need is presence at this time. Nobody really remembers what someone says at a wake or a funeral–what they remember is that you were there! Often people try a bit too hard to say something meaningful including us ministerial types who often overdo it.

Some of the dumbest things I’ve heard people say at wakes or funerals and one major story:

3) “At least he’s free of his pain now.” (One I even said at a wake of my own college roommate before realizing that him being dead really didn’t bring comfort to those who watched him suffer).

It’s got to be tough to have to do a funeral homily or to say a few words at a wake for someone you’ve never met. This was the case for the priest who officiated at my Godfather’s funeral.

I was the lector at the mass and the priest asked me if I could tell him some things about my Uncle/Godfather.

“Well, his given name is Patrick but nobody called him that. Everyone called him “Bubby.” Which we think was one of us kid’s mispronunciations of “Buddy.”

So during the homily the priest begins with a great interpretation of the readings and a nice comforting message and even a bit of challenge for us. And then…

“Since Patrick was so endearing to the children of his family they nicknamed him BOOBY.”

And the rest of the homily continued to repeat that mistake until the entire family was nearly screaming, “BUBBY! Not BOOBY!”