10 Groups We Should Take Better Care of Before the Anglicans 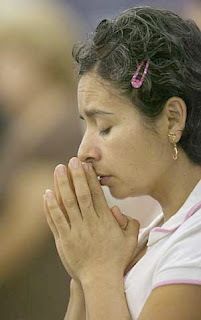 Welcoming the Anglicans should take a backseat to welcoming Hispanic Catholics. So says Paul Snatchko over at Between the Burg and the City.

I also think that, for the Catholic Church in the United States, the need to accommodate Anglican-Catholics is much less pressing than the need to better minister to the millions of Spanish-speaking Catholics. (I go to a lot of Catholic conferences. FYI, it’s not a British accent that I’m hearing.)

Paul makes a good point. In fact it’s so good that I came up with 9 more people that we should be welcoming into the fold BETTER and BEFORE the Anglicans.

1) Hispanic Catholics: As Paul said the church will soon be 50% hispanic. But it’s not fair to lump all hispanics into one demo. There are literally dozens of different cultural experiences that exist within hispanic culture. The Cubans express their faith much differently than the Dominicans do. The Mexicans are far different from the Puerto Ricans. Central Americans are different than South Americans and those from Spain are even more of a different culture. We haven’t come close to identifying how best to reach all of these different peoples. Instead we simply call all of them Hispanic and we start putting things out in Spanish. Now that’s not a poor start but we need to think more deeply about this.

2) Young Adults: Duh. Surveys show that even smaller amounts of Millennial Catholics in their 20s generally speaking, go to weekly mass than their predecessor 30 and 40 something Generation Xers. We don’t do a good job of engaging them into parish life or teaching them about the faith that most were poorly catechized into. I doubt that many have thought critically about where they see God working in their lives and there are oodles of unchurched people that we do absolutely nothing with that are hungering for meaning.

3) Married Couples: We run them through several hoops for a sacrament but don’t really do our best to a) make their day a special one, b) get to know them well or c) engage them in parish life. Many are marrying outside the faith and outside the church because they make it convenient for them. How do we engage and not be annoying so that they feel inconvenienced?

5) Pan-Asian Catholics: This is the second largest demographic and like the hispanics we have several differences. Those from the Philippines are quite different from those in China or Japan. There are loads of young people in Hawaii and Tonga and more of those island nations who mix their culture with their religion in beautiful ways that we forget about all too often.

6) Young Priests: Stop laughing. These guys are being thrown to the wolves. Young priests are poorly prepared for church management and some have little pastoral skills and come in feeling like they have to lord their priesthood over their parishioners. They get a quick wake up call and then reassignment is not far off. Young priests are raised to pastor much faster today and many don’t know the first thing about managing a parish. Which leads me to my next group…

7) Religious Women: Let’s face facts. If it weren’t for religious women, the church wouldn’t exist today. They’ve kept schools running and do much of the work in the parish that needs getting done. They haven’t been appreciated as much as they need to be. In my new parish, I’m not sure what they’d do with Sr. jeremy, one of our pastoral associates. She keeps so many items juggling in the air and makes it look seemless.

8) Bishops: Again stop laughing. Bishops are faced with much and like their younger priest counterparts many get raised to their Bishopric without being prepared to be a chief administrator. I think this is a huge reason that the sex scandal was so huge in the United States. These guys weren’t ready. Did they make huge mistakes? Yes. Should they be punished for that? Yes. But could those mistakes have been avoided? Most certainly.

9) Contemplatives: In a world filled with noise we crave the quiet and therefore the contemplatives amongst us should be revered as wisdom figures who have much to teach us. Go watch the movie Into Great Silence and then sigh at the beauty that is contemplative life.

10) THE PARISH SECRETARY/RECEPTIONIST/ADMINISTRATIVE ASSISTANT: Whoever is the first line of contact for people who call us. This is the person that many form their opinion of our parish based on. And she or he does much to make the parish a welcoming place. We hope. When this position is not taken seriously, we end up in big trouble. I called a parish I was familiar with the other day and asked for a long time youth minister from the receptionist and he didn’t know who she was.
Do we take the time to train and make these people feel welcome?

There’s more but I’ll leave the rest to you…who else should we welcome?