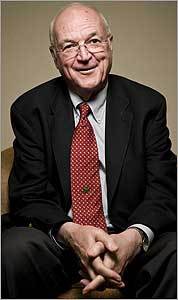 I must’ve been sleeping throughout September because this article crept past me by the esteemed Professor at Notre Dame Richard McBrien.

Notwithstanding Pope Benedict XVI’s personal endorsement of eucharistic adoration and the sporadic restoration of the practice in the archdiocese of Boston and elsewhere, it is difficult to speak favorably about the devotion today.

Now that most Catholics are literate and even well-educated, the Mass is in the language of the people (i.e, the vernacular), and its rituals are relatively easy to understand and follow, there is little or no need for extraneous eucharistic devotions. The Mass itself provides all that a Catholic needs sacramentally and spiritually.

Eucharistic adoration, perpetual or not, is a doctrinal, theological, and spiritual step backward, not forward.

McBrien is showing his crotchety old demeanor here and is a good example of someone who throws the baby out with the bathwater.

Especially amongst the young eucharistic adoration has become a practice that many have found to be worthy of their time. The larger question that most baby boomer Catholics don’t ask is why? If I had a dime for every baby boomer campus minister who gets alarmed at the fact that young people are choosing to do this devotion, I’d be a rich man.

Send your dimes ASAP by the way.

So why are young people liking this particular devotion more and more? It is not out of literalism, but more out of a need for contemplation, tangibility and belonging.

1) Contemplation: In a world filled with noise where a moment’s peace is never found, why would we not be surprised to find young adults flocking to a place where they can simply have one hour of peace to clear out the cobwebs? By the way the last time i checked the Eucharist was in fact, the source and summit of our faith. So again why are we surprised that young people flock to a moment’s peace with the central element of our faith visible to them?

2) Tangibility: The Eucharist is tangible. Jesus understood this better than anyone. He provided us with a ritual that tells us that we. as Catholics do the hard things first. If we can indeed understand how GOD can unite with a piece of bread and a cup of wine and that when we consume it we remind ourselves of a presence within us that was already there, though hidden. If indeed when we are reminded of that WE are transformed, we become what we receive, then we are truly living the body and blood of Christ.

But sometimes that become route. We consume and do not transform. We eat but do not reflect. We receive but are not changed because we have no time to be mindful of what we are doing. We are off to the next thing to do and take no time to think about what we are doing then the Eucharist becomes another empty ritual (at least internally for us). Adoration provides that mindfulness that we often miss.

3) Belonging: When people leave the church they often point to the Eucharist as the thing they miss the most. It is the Eucharist that many consider the very essence of Catholicism.

And it is. Without the Eucharist we long for it. We consecrate more hosts to insure that people have access to it. We hold communion services and call them that because people want Christ in the Eucharist, that tangible reminder of Christ’s presence already within us. They may love scripture, but they want the Eucharist. And they miss it when it is not there.

Now I think Richard McBrien is far from a dumb man, and I can even appreciate his thought on the over-literalism that many take on when it comes to the Eucharist and even with adoration. But that is far from the norm and to lump most of those who practice Eucharistic Adoration into one boat is at best short sighted and at worst, prejudicial.