Oct 1, 2009 blessing of the animals, dogs, dogs in church, feast of St francis, should I bring my dog to church 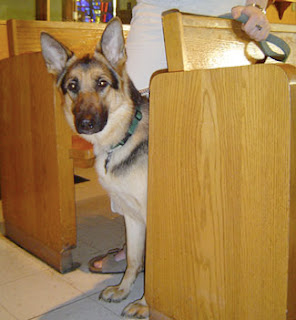 Every once in awhile I would be running late from one appointment or another and would bring my dog to church. Some folks were OK with it while others were very uncomfortable with the idea of having a dog in church. I think that there’s a huge pastoral opportunity for someone who would consider doing a Sunday afternoon “Pet Mass.” People could come to mass with their pet, especially older people who have grown attached to their companions and hate to leave them alone, or people who have pets with separation anxiety and who haven’t quite worked through it yet (the way my dog was for awhile).

Many people have fears about dogs making a mess in sacred space and that’s a legitimate fear with an easy solution. You have all owners sign a waiver that requires them to clean up any mess that their dog or other animal might make or they lose the privilege of having a dog accompany them. Dog fighting? Same thing holds. Dog barking…well…we put up with babies crying without much huffiness. But maybe at the Pet mass they have to go to the “bark room.”

I understand that not everybody is as animal friendly as I am. Dogs can be scary for some people and cats frighten people as well. Is it appropriate for people to bring an animal to mass when that’s not the norm? Obviously, therapy dogs are an exception but my friend Felicity had a quiet dog that sat on her lap all through mass and never uttered a peep for years. I think if they are quiet and unassuming and don’t disturb anyone else, there’s no harm in it, especially for small dogs who can remain quiet and on the laps of owners. Big dogs would be a harder sell.

BustedHalo® has a great story about a therapy pet who visits nursing homes and would go to weekday mass with her pal:

“Hey, lady-with-the-dog, what’s your dog’s name again? Lily?” asks one resident. “My great-niece is Penny — do you know her? She says she knows you because she sees you and Lily in church. I said she was mistaken; who would take a dog to church? Do you know Penny?”

“Now, why would Penny see your dog at church?”

I explain how Lily enjoys going to Mass with me.

“Well, that’s a new one on me,” she exclaims. “Penny’s Catholic, you know. I’m an Independent Baptist, and we don’t do that sort of thing.” I explain the details, and with that, Penny’s great aunt Della is off and running down the hall with the story.

“Maudie Lane, come here. I’m going to tell you such a story; you won’t believe this. You know that dog that visits us? Lily is her name. She goes to church in the Catholic church. Well, that’s not something we’d do, but that dog goes to church every single day. Can you believe that? She got trained there, the lady said.”

Maudie retells this story to the nurse’s aide: “Yes, that’s right. That dog goes to church every single day at the Catholic Cathedral. Why, she was even born at the church. Yes, as just a little puppy they say, isn’t that something? I guess she must live there.”

Now she wouldn’t go to mass on Sunday with her owner which probably means that she’s be less unassuming during that time. Too many people and it may cause an unneccessary distraction.

This weekend is the blessing of the animals often associated with the feast of St Francis. So we have a more formal opportunity to bring our pets to church or to an outdoor venue (as my parish does) for a blessing. So as we bless all of creation including “brother dog and sister cat”, as Francis would say let us be reminded of the great companions that they are for us.