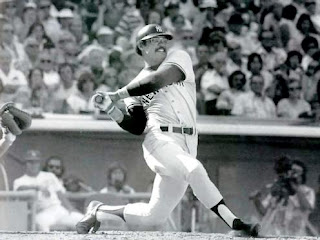 Reggie Jackson is doing a show called October Nights on Sirius Satellite Radio these days and with the dawn of baseball’s post-season, I always think back to baseball stars of the past that I can remember. Reggie is certainly one of them.

Growing up in the 70s and 80s there were two men who I remember as just having such arrogance that their swagger and confidence always made you want to hate them but they were so good that you had to respect them as well. Muhammad Ali was one and Reggie jackson was the other.

I hated him. I was a Mets fan who was surrounded by Yankee fans in my Yonkers neighborhood, a stone’s throw from the House that Ruth Built. Reggie was a star, nay, THE star on a loaded Yankees squad that won the World Series in 1977 and 1978 when I was in first and second grade and just beginning my love affair with baseball.

Fast forward over 20 years and I was a radio beat reporter for WOR covering the Yankee Old Timers Day. Out of the dugout stepped Reggie. He still looked larger than life. And he still had that swagger, that arrogance. He stepped into the batter’s box for batting practice and crushed a pitch into the bleachers and another and another. The old man could still swing well into his 50s. Jackson finished his batting practice regimen and then came over to talk with us reporter types.

He answered easy questions on a fun day such as what the difference is in the game today as opposed to when he played. “Money” was his one word answer (and for his time, Reggie was paid handsomely but nowhere near what guys get today!).

I had my moment to ask him a question:

“Reggie, I can still see you appreciate the fans coming out to see you. You still are trying to hit those pitches out of the park. Can you tell me what the fans mean to you today as opposed to when you were playing?”

Me: (Nervous, thinking I’ve annoyed him) No, Reggie..that’s not what I meant…”

Reggie: (now smiling) Nah man, I ain’t mad. (Slings his arm around me and pokes me in the chest playfully) I’ll tell you what..I’m gonna hit you a homer today in the Old Timer’s Game. Just for you!”

Me: (Trying to stay professional) “OK, Reggie. Thanks.”

We departed and I went upstairs and took my seat in the press box as the Old Timer’s Game began. If you’ve never been to an Old Timer’s Game it’s hysterical. It’s the equivalent of a not-so-serious softball game, although some would say that even at their age most of these guys hate to lose and some take it more seriously than others.

Reggie got up to the plate. Dug in and awaited the pitch. Fastball belt high.

And like a bullet the ball flew high and far into the right field bleachers. Home Run.

Reggie took his home run trot and as he rounded third base he looked up to the press box and pointed to me. I simply waved back and started laughing.

Later on I ran into Reggie as he made he way to his office which was near the press box (Reggie works for the Yankees as a special assistant now). He winked at me and said “Told ya.”

Such swagger, such arrogance…but in a good way. It’s something I used to hate but now wish I would see more from today’s athletes who, as Reggie even admitted seem to be more about making money than winning baseball games. Derek Jeter may be the lone exception but even he lacks that kind of swagger that Reggie and Ali oozed at all times.

So tonight I hope that the Yankees can begin their quest for another World Championship with the swagger that demands respect, an arrogance that comes with being great.