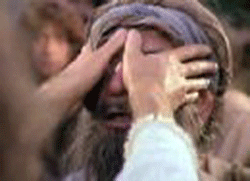 Sunday Readings can be found here

Sometimes I only see what I want to see. In my many years of living in NYC, I would pass dozens of homeless people on the streets and I would avoid them like the plague. I mean, they smelled bad and were disheveled and even though I worked at a homeless shelter from time to time, I never really considered any of them friends. I didn’t get to know their stories. They were more like “problems,” and while I wanted to help the poor, I really didn’t want to get too close to these people either. They didn’t belong in my home and I certainly wasn’t going to invite them to have a meal with me at the diner or hire them for a job.

And while I’m embarrassed to say this now…I sometimes would think to myself that they must have done something to DESERVE that cardboard box that they use for a home.

So today’s gospel has been a real eye-opener for me–literally. We hear about the healing of Bartimaeus, who is one of the only people healed by Jesus that we have a name for…

And that name bar-timeaus…son of Timaeus…has a bunch of meanings.

In Aramaic, Bartimaeus means “son of the defiled one.”

And that makes sense because people believed at the time of Jesus that if you were blind or sick or even poor–that this was a sign of God’s disfavor. You were a sinner…and the sicker you were the more of a sinner you were. So people thought that Bartimeaus must’ve done something awful, just awful….to DESERVE his lot in life.
And maybe Bartimeaus wondered what it was that he had done…let’s see which sin could it have been that struck me blind?

Now in the Greek language Bartimaeus has yet another meaning: “Son of the exhalted one.”

So what the gospel writer of Mark trying to tell us today? Is Bartimeaus a sinner or is he something more?

Well…Bartimaeus answers this question for us. He begins to call Jesus…no, he begins to CRY out;

JESUS! HAVE PITY ON ME! The cry of a desperate man…hoping beyond hope that someone will believe that he is more than the sinner that everyone thinks he is.

And the crowd says “SHUT UP! What will the great rabbi want with the likes of YOU?”

But he persists all the louder… hoping that Jesus will believe him. Maybe even trying to convince himself that he is not worthless. And Jesus sees more in this man than he sees in himself. Jesus knows that Bartimaeus, deep down doesn’t really believe that he is a good for nothing BUM…and Jesus uses Bartimaeus as an example to the crowd. Because if this Bartimeaus is no longer blind—then the rules have changed. God did not punish him with blindness…instead God makes him and example for others to learn from. A man of great faith who believes that Jesus can cure him. A man even the most religious in the crowd would envy.

Once an outcast on the side of the road, Bartimaeus is now a respected part of the community who continues on that road to follow Jesus.

Now if that’s not a miracle… and it is a miracle that I need too.

I need that miracle to cure the fact that I too, often pre-judge people based on who I think they are. I don’t always see Bartimaeus’s with the eyes of Jesus.

And I need others to help me do that. I’ve had others who have helped me do that.

One is Allen…who is from Kenya and I met Allan at World Youth Day in Sydney last year. And I pre-judged him.

When I heard that Allen was from Africa I immediately assumed that he would have a very simple spirituality. That he would have nothing to teach me about life…someone from the first world…the rich United States.

And so when I asked him what it was like to be catholic in Kenya…I didn’t expect much. And his answer was astounding:

To be a Catholic in Kenya is lovely. But there are lots of challenges because we are confronted with HIV and AIDS. Because most of the young people in Kenya have relatives or friends that either have HIV or AIDS and this takes away most of the income that most of the people have and most of them are poor to begin with. So our faith demands that we as young people have to give home care to people with HIV and AIDS and to try to find additional jobs to help support their families as well. And the Catholic community has also worked to help find treatment for these people who have been infected by AIDS so that they might live a little bit longer.

Talk about someone who we should call an exalted one…and someone that I had and have whole lot to learn from but who I initially disregarded. Allen is someone who lives his Catholic faith each and every day–and he does it with a smile on his face, proudly.

And there’s a real challenge that World Youth Day provides us. Because at WYD, It’s easy to be a Catholic because there is strength in numbers thousands sometimes millions of Catholics all in one place–strength in numbers. The real challenge of World Youth Day is not simply to go and be with all those people, no…the big challenge is to have that event change you… So that you might coming back to your everyday life where we often don’t have that kind of support and still be proud to be Catholic and to live differently because of that.
The young people who sit with us today here in this church know how hard to be a young person of faith in today’s world. And the Pope knows that as well. The Pope knows of the pressures you face from all sides of our modern culture that says that wealth and pleasure are the the only things worth attaining.

World Youth Day reminds us that we need to support one another each and every day in our catholic faith and more importantly we need to support those who really need us–the Bartimaeus’ of our world who are too often pushed to the side and forgotten about.

After all, I know I don’t often care for the Bartimaeus’ of our world–be they pregnant teens in our city, or parents who are getting older and demand more of my time. I let the homeless and the poor be pushed into ghettos and those in the developing world seem all too far away. I don’t concern myself with the needs of people beyond my family and friends and quite often I don’t concern myself all too much with their needs either.

The challenge of WYD is to remember what we learn there. For me I need to remember Allen and how inspiring he was to me.

At the last World YD in Sydney, I’ll always remember what Cardinal George of Chicago told all of the American pilgrims. He said that each and every one of us, even though we might be very faithful, each of us has something that holds us back from completely giving our lives over to Jesus. That there is one little or maybe a big part of us that simply doesn’t really trust that we are good enough, or holy enough. Indeed, when it comes to committing ourselves to Jesus we have a blind spot.

And that’s the point Jesus wants the crowd and us to come away with. That despite sin Jesus is always willing to say the words…”What do you want me to do for you?” Because Jesus sees more in us, than we often see in ourselves.

So today, ask yourself, “What’s my blind spot?” What blindness does Jesus need to heal me from? What keeps you from believing that Jesus can heal you from all the blindness, all the things that we don’t like about ourselves.

And all we have to do is say…