The Puking Fish of God 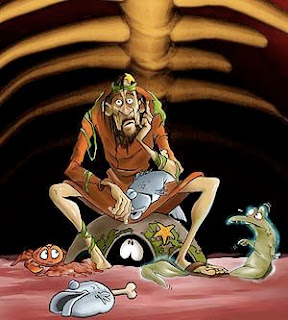 Today’s first reading is about Jonah and the large fish (not a whale) who swallows him, has him live in his belly for three days and nights only to puke him up on the shore in the end.

It’s a story that we all know well and that many of us sophisticates doubt the veracity of. If you know anything about biology, you know that people generally do not survive attacks by large fish much less ones that can swallow one whole. Just turn to the Discovery Channel and you can see evidence of that.

But of course, biblical reading is not literal history but rather revelation: stories with a point to them.

What indeed might God be trying to tell us here?

The story in general is about our attempts to escape God and more importantly to escape what God has in store for us.

I know I often try to hide from God, like Adam did when he was naked and ashamed at what he had done. I try to hide when life gets too overwhelming and I know I’m really called to serve the needs of my family even when they get on my nerves or try my patience. I fear success at times knowing that God expects a lot of me and with every success comes new and different challenges and opportunities.

I often hide from God because I don’t think God really wants me. That I am not good enough for God. That God couldn’t possibly change lives with a person like me!

This is also Jonah’s dilemma. God sends him to Nineveh to preach against the wickedness he sees there. Jonah either fearing the Ninevites, doubting his abilities or understanding his own unworthiness (or maybe all three) goes in the opposite direction from Ninevah to Tarshish–180 degrees away from where God is calling him.

But God won’t have it. The sea is tossed and the crew finds out it’s all because Jonah disobeyed God. So they throw him overboard at his own suggestion. Jonah’s agreement to be thrown overboard shows how he really just doesn’t think much of himself. “Oh, if these people would just be rid of me, their world would be a better place.”

But God has much more in store for Jonah and for us. When our very lives appear to be over we often end up being puked up on new shores. We may be tired and beaten up and smelling like fish guts, but here we are. We are headed onto new adventures where God will continue to lead us. God has brought us through the storm and through the belly of the beast.

Moreover, if we read ahead, God spares Nineveh with Jonah’s help–but there’s an even greater lesson in Jonah’s story. Jonah becomes indignant saying that he already knew that God was merciful and had been preaching that for years in his own land. God provides him comfort from the heat by giving him a large shady plant but then he kills the plant and this makes Jonah mad. God then tells him:

“You are concerned over the plant which cost you no labor and which you did not raise; it came up in one night and in one night it perished. And should I not be concerned over Nineveh, the great city, in which there are more than a hundred and twenty thousand persons who cannot distinguish their right hand from their left, not to mention the many cattle?”

We all tend to take things for granted and we get angry at things we lose that we really didn’t develop. We don’t care for others. Jonah could care less about the Ninevites, caring more for the comfort of his own land and his own people and even for the accolades that he gets there.

But God calls us to places that we need to go to, so that we may bring God to others and that we might understand God’s love which runs much deeper than those familiar boundaries. Try though we might, we always end up having to deal with the things that God wants us to deal with a anyway.

So today, let us ask ourselves where our Nineveh is. Where is God calling us to help people understand His love and forgiveness? Where do we need to go, accepting the difficult call from God?

For myself, I will soon move to Buffalo, an unfamiliar place with unfamiliar people. I will need to drive a car something I do not like doing but something that will enable me to serve others more frequently and easily. I did not expect to go to Buffalo but here I go anyway.

Today let us pray for confidence that whether Buffalo or Nineveh or wherever God calls us, we might have the confidence in ourselves and in God that great things can be accomplished. May we also know that God will always send us to people that he loves whether in prisons, on campuses, or to foreign lands. Our response is always to love and embrace God’s call and God’s people.