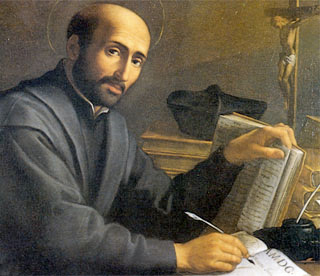 Since it is all Saints Day I started to reflect on my favorite saints today and Fran from the Parish Blog of St Edwards had asked the same question of people on facebook. Paul Snatchko made a good point about it’s like picking your favorite child–you just can’t do it.

St Ignatius of Loyola is certainly one saint who has been a great influence on my life, not only because of his great intellectual contribution to the church but because he wanted his followers to be “contemplatives in action.”

Ignatius, a gallant soldier who was wounded and who had a profound conversion while recovering wanted his followers to be “men for others (and today we would add women to that mix).” So instead of locking themselves away in a monastery and praying the liturgy of the hours for the world, Ignatius wanted to be different. He wanted to maintain that prayerfulness while having his followers interact with the world.

That’s the real part of Ignatian spirituality that is attractive to me–being in the world but yet being a person of prayer. As a spiritual director, I hope that I can help people see God working in their everyday life.

The Spiritual Exercises resulted from that initial experience of being in the world. In particular, the Examen of Consciousness, a daily review of our actions focused on grace and thankfulness to God, became a maxim for the Jesuits who found it too difficult to keep up with the monastic liturgy of the hours due to the demands of the world being so great. Ignatius bound them to do the Examen daily, especially if they had no prayed at all that day. It is something that I often do in my own life. I try daily, usually when walking the dog or late a night after my wife has retired before I join her in bed. But thanks to the good St Ignatius I have been educated and continue to connect with God in my daily life–a great reminder and a great gift for us all.

I have a superficial but yet profound reason for liking St Ignatius: he’s bald! Folks say I resemble him–but it’s when I pray that they mention this.

Because when I pray, I cry.

Tears flow easily when I pray. I can’t explain it and I no longer am embarrassed by them. The tears are signs of the spirit and that God and I are intimately connecting, most of the time through others but sometimes in quiet and stillness too. This is something that Ignatius was in touch with as well. He called it the gift of tears and in fact, he said we should pray to be so moved in prayer. I often would say that if it is a gift I’d like to give it back. But now, I would not exchange it for the world. Because it is an expression of my soul. Thank you, Father Ignatius.

The second is St Joseph–the foster father of Jesus. In many ways he is the saint of the short shrift. We don’t know much of Joseph. We know he was an artisan of some sort, a tradesman who worked with his hands. Traditionally we used the word carpenter to describe him but he held a more intricate position than that some scholars say. 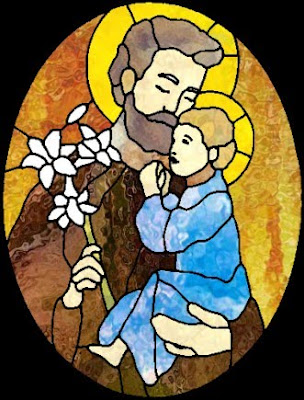 He reminds me of my own father, an unskilled laborer who worked for a living in helping his family make ends meet. Often my dad didn’t get enough credit for all he did for us and as he has aged, I’m starting to appreciate that more and more.

It is no surprise that I have ended up at a parish named after St Joseph with an Ignatian college not far away as well. The best of both worlds as far as I can see. Our Pope Benedict is also a Joseph, his given name and his papacy thus far holds the same promise that I think Joseph must’ve felt at the prospect of fostering Jesus: a daunting responsibility but also an anticipation of the great prospect of what lies ahead. We also tried adopting at one point and while it didn’t quite work out the way I would’ve liked, I learned so much about my own gifts and responsibilities and got in deep touch with St Joseph’s experience.

Joseph for me is all about anticipation. And anticipation often means that we remain in the tension of not knowing what comes next. Joseph presumably died before he could see the promise of the resurrection–a common motif amongst prophets and other searchers. But the fact that Jesus and Mary lived a long time when both poverty as well as infant and child mortality was extremely high in their culture points towards Joseph’s care and contribution for his family. He is a saint that the working class should come to love and resonate with especially in today’s economic climate.

So today let us pray to our favorite saints for they hold something personal and special for us all.

Who’s your favorite saint? And how have you connected with him or her so intimately?

Thanks to Chantal Stain Glass patterns for the pic of St Joseph.

0 thoughts on “Your Favorite Saint…”