Cardinal George: “is it Catholic?” 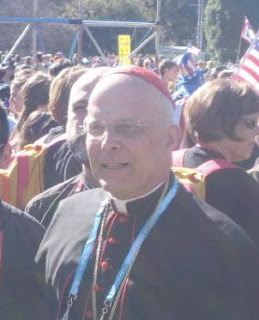 David Gibson muses at Politics Daily about the recent decision of USCCB head Cardinal George’s setting up of committees to determine if voices in education, media and lay groups represent Catholicism. In doing so he sets up the Bishops to be the arbiters of “all things Catholic.”

In my opinion, this is something that needs to be done because, simply put, any moron can have a blog (including this moron!) and that doesn’t make the moron a Catholic moron. Many people from different facets of the Catholic spectrum indeed attempt to speak with a Catholic voice but really fail miserably at representing themselves as legitimate voices. This includes not only those who would say that they support abortion rights for women but also those who would support, say capital punishment in clearly unjustifiable situations.

So why the sudden hankering from Cardinal George on the need for the watchdog group? David Gibson has some ideas:

Church officials said George’s decision to establish the certifying committees reflected his frustration with the many differing Catholic voices and organizations that sprouted up during last year’s presidential campaign and claimed to be representing Catholic positions, some of them in support of Barack Obama.

Many of the most prominent bishops were vocal opponents of Obama, who nonetheless won 53 percent of the key Catholic vote despite espousing pro-choice positions on abortion, which is the overriding issue for the bishops. And many of those outspoken bishops — perhaps still a minority of the entire hierarchy, but an influential one with close ties to Rome — were also incensed at the University of Notre Dame for inviting Obama to give its commencement address last May. The anger over that invitation, which was issued despite the opposition of the local bishop, John D’Arcy, and the rifts it exposed among the bishops and lay Catholics, still bother George, church officials said. Hence his effort to establish clear parameters on who speaks for the church and what it means to be Catholic.

But several bishops and church officials I spoke with doubted whether George’s desire to implement the certifying committees would gain any traction among the bishops. For one thing, beneath the surface of civility, the bishops are as divided on many of these issues as the rest of the American church.

In addition, George played it so close to the vest in setting up the committees — he launched the initiative over the summer — that up until the first day of these meetings many bishops didn’t know who was on the committees or how many there were. There are, it turns out, three such committees: on Catholic universities, Catholic media, and other Catholic organizations, reportedly those involved in lobbying.

I wonder if the question is really nt “Is this Catholic?” but rather “Is this Catholic ENOUGH?” and that will lead to all kinds of divisions that indeed, may need to be hashed out in some kind of forum.

Ordinarily I would agree with Gibson in that I would have doubts about how much traction this might have. But in a world where there are far too many sources, especially for unchurched seekers and the theologically uninformed, discerning truth from suggestion is indeed difficult. Is this site a Catholic one indeed is an interesting question worth looking at.

However, there’s a huge issue that goes far beyond the simplicity of legitimate Catholic source material. That issue is simply media literacy. After all, there are news programs on radio but then there are opinion programs. When I was in radio for years I noticed that there was almost no discernable difference between how listeners viewed journalistic types of programs with the more opinion based meanderings of a Rush Limbaugh, Bill O’Reilly, John Stewart or Keith Olbermann. The same is true in catholic circles. There’s a huge difference between magazines like America or First Things, which serves to raise the level of debate and interesting conversation and catechetical resources that proclaim church teaching definitively. Those are resources that need some review as well. New Advent for example claims that the 1917 Catholic Encyclopedia is the definitive source that all Catholics should use, and it’s the one most used by people online. Will the Bishops’ committee talk about those differences? Or will they simply focus on external debates in the blogosphere which they clearly have no chance of curtailing. The internet will continue to have opinion blogs with or without the blessing of the hierarchy and they will continue to entertain and inform.

But they don’t necessarily teach. That indeed may be where the Bishops might want to regain some control. 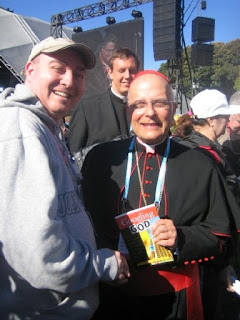 Well at least we know one thing: My book Googling God will make the cut. After all, Cardinal George is holding it here with me.