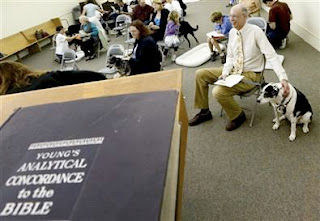 I told y’all this was a good idea. National Headlines and a gracious parish…

LOS ANGELES – When the Rev. Tom Eggebeen took over as interim pastor at Covenant Presbyterian Church three years ago, he looked around and knew it needed a jump start.

Most of his worshippers, though devoted, were in their 60s, attendance had bottomed out and the once-vibrant church was fading as a community touchstone in its bustling neighborhood.

So Eggebeen came up with a hair-raising idea: He would turn God’s house into a doghouse by offering a 30-minute service complete with individual doggie beds, canine prayers and an offering of dog treats. He hopes it will reinvigorate the church’s connection with the community, provide solace to elderly members and, possibly, attract new worshippers who are as crazy about God as they are about their four-legged friends.

Before the first Canines at Covenant service last Sunday, Eggebeen said many Christians love their pets as much as human family members and grieve just as deeply when they suffer — but churches have been slow to recognize that love as the work of God.

“The Bible says of God only two things in terms of an ‘is’: That God is light and God is love. And wherever there’s love, there’s God in some fashion,” said Eggebeen, himself a dog lover. “And when we love a dog and a dog loves us, that’s a part of God and God is a part of that. So we honor that.”

The weekly dog service at Covenant Presbyterian is part of a growing trend among churches nationwide to address the spirituality of pets and the deeply felt bonds that owners form with their animals.

And if that’s not enough:

The article also reports a survey “that found more than 500 blessings for animals at churches nationwide and has heard of a half-dozen congregations holding worship services like Eggebeen’s, including one in a Boston suburb called Woof ‘n Worship.”

I think we should take a cue from these other denominations: A Pet Mass…each Sunday at 3PM. Bring your pets, take care of them and we’ll purify the air afterwards for those with allergies. They might even look like my dog haze who suspiciously looks like a Friar of the Renewal in this pic. 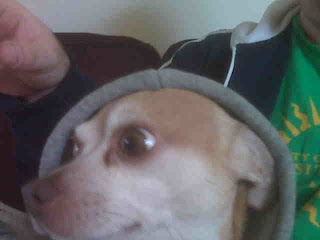