Today’s Headlines will suggest Jihad but should they scream War Trauma? 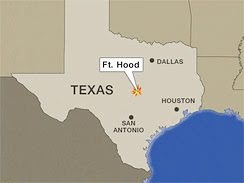 After reading about the tragic shooting at Ft. Hood yesterday, I couldn’t help but react with sadness and frustration at another random act of violence in our country. CBS News reports on the shooter:

A law enforcement official identified the shooting suspect as Army Maj. Nidal Malik Hasan. It was unclear what the motive was, though it appeared he was upset about a scheduled deployment. U.S. Sen. Kay Bailey Hutchison said the Army major was about to deploy overseas, though it was unclear if he was headed to Iraq or Afghanistan and when he was scheduled to leave. Hutchison said she was told about the upcoming deployment by generals based at Fort Hood.

Faizul Khan, a former imam at a mosque Hasan attended in Silver Spring, Maryland, said he spoke often with Hasan about how Hasan wanted to find a wife. Hasan was a lifelong Muslim and attended prayers regularly, often in his Army uniform, Khan said.

CBS News reports that Hasan, 39, is a licensed psychiatrist who has lived in Bethesda and Silver Spring, Md. and Roanoke, Va. A spokesman for Texas Sen. Kay Bailey Hutchison says Hasan was upset about an upcoming deployment to Iraq.

It doesn’t help the anti-Muslim sentiment amongst some segments of our society that the shooter was a Muslim. I have more suspicions that perhaps he was self-medicating for depression and perhaps not effectively dealing with his own fears. Often psychiatrists only believe in the power of medication on the mind as a proper aid to help in the treatment of psychoses. Talk therapy is often also prescribed and the client would be sent to a psychologist for that additional treatment–much needed in many cases to help.

The Guardian agrees with me:

He was not a soldier returning from deployment in either Iraq or Afghanistan, suffering from stress or combat fatigue. Hasan, although 39 years old, he had never served in a war zone. Instead, his horror of war came second-hand. He was a psychiatrist who listened to the harrowing stories of his comrades at the Walter Reed Hospital in Washington DC, and latterly at Fort Hood, Texas.

Unusually for a soldier, Hasan appeared to have little taste for violence, at least up until yesterday. His cousin, Nader Hasan, said: “He was someone who did not enjoy going to the firing range.” That may have been a consequence of the stories he had heard in the hospital wards from the returning soldiers.

Mental health is a severe issue in our country and the headlines should scream this today. But I fear that they won’t–or if they do, it will merely denigrate those with mental illness instead of talking about the real tragedy–the lack of proper treatment for those who have severe mental disorders and who often go unmedicated. Secondly, all soldiers should be required to talk with a counselor, if they are not already, on a regular basis. Many won’t seek help out of fear of looking weak, the worst stigma a solider can face in military circles.

The sad thing is that many of those who suffer from mental illness in our country are still stigmatized. This includes those who take their medication and receive the therapy that they need. When moments like this happen all of the mentally ill struggle because of this stigma and those that have been doing well get lumped into a package that defines them as a freak. With the expanded exposure to war in military circles I fear that the number of those soldiers who do not seek help for trauma is increasing and many are being lost in the shuffle. Our Armed services needs to address this immediately and we should be making this a top priority. Until we do, more will suffer. And that suffering will only lead to more violence, death and further stigma on all of the mentally ill in society.

Today let us pray for Ft Hood and for those who suffer from mental illness.

0 thoughts on “Today’s Headlines will suggest Jihad but should they scream War Trauma?”