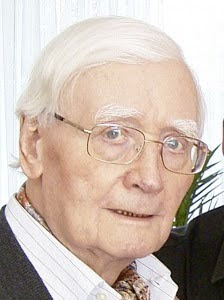 Influential Dutch theologian Edward Schilllebeeckx has died of natural causes today at the age of 95.

NCR has the story

Schilllebeeckx was one of the most influential theologians during and after the Second Vatican Council, interpreting the meaning of the council to Catholics throughout the world. He was a major supporter of the reforms that came out of the council. His books were translated into many languages.
After being educated by the Jesuits, Schillebeeckx entered the Dominican Order in 1934. He studied theology and philosophy at the University of Louvain. In 1941 he was ordained to the priesthood.
During the Second Vatican Council, Schillebeeckx was one of its most active theologians. He drafted various council interventions for Dutch bishops such as Cardinal Bernard Jan Alfrink. Because he had been a “ghost writer” for the Dutch bishops’ pastoral Letter leading up to the council in 1961, he was rendered suspect with the Congregation of the Holy Office, led at the time by Cardinal Alfredo Ottaviani.

While the Vatican rejected some of his ideas, Schilllebeeckx avoided censure from the authorities. His ideas on Eucharist and priesthood challenged the idea that the two are absolutely intertwined, noting that this was not an absolute in the early church and more importantly that the current linkage was keeping people away from the Eucharist.

A frequent visitor to the United States, Schilllebeeckx had much contact with young adults and noted smartly:

… that most young Catholics are “choosing their own vision of Christianity.” He said he feared the institutional church did not “have enough movement toward Jesus Christ.” And he spoke about his soon-to-be-published book, a collection of 60 of his homilies, with a title still being fine-tuned: something like Weren’t Our Hearts Burning Within Us: Theology as a Model for Proclamation.
As for the future, Schillebeeckx is optimistic, “always optimistic.”
“I believe in God and in Jesus Christ,” he said, as if to ask: “And what else would one need?”