Believe in the Power of the Doggie Jersey

I’m not much into superstitions but…

The New York Jets won their playoff game over the Bengals yesterday, and more importantly, my dog haze was wearing his Jets jersey. Every time he wears it –the Jets win. Believe in the power of the doggy jersey!

I wanted to get him the number “1/2” but they don’t do fractions.

While we’re discussing Dogs and sports, Clark Gillies who played for the Islanders in their glory days when they won 4 Stanley Cups dumped a can of dog food into the illustrious trophy and let his mutt eat his dinner. Someone asked “Why did you let that dog eat his food out of the Stanley Cup ?”

His response was brilliant: “Because he’s a good dog!”

And trust me from the stories I have heard about that Cup, the dog’s mouth might have been the cleanest thing to touch the inside of that cup in years. In fact, it was probably more dangerous for the dog than any of the players.

And speaking of hockey, I attended my first Sabres game last night at HSBC Arena with my newfound friend Steve Spear (husband of the legendary youth and young adult minister here, Patty Bubar Spear). He got me up to speed on Sabres history and while we left saddened by a Buffalo loss to Colorado, they at least got a point by taking the mighty Avalanche to a shootout. A great game and a great time with a new friend.

I was never a huge hockey fan. I mean I rooted for the Islanders in their hey-day and then got to work on Rangers broadcasts and I have a picture of me with the Stanley Cup thanks to the Devils future Hall of Fame goaltender Martin Brodeur (who brought the cup to the radio station and let me carry it out to his car!). But I was lukewarm about the whole thing, riding the wave when hockey captured the attention of New York City as the Islanders did in the 80s and the Rangers Stanley Cup season after a 54 year drought. But I always thought I should have been a bigger hockey fan, because by and large hockey players are the nicest pro-athletes around. I don’t think any Met or Yankee would let me touch the World Series trophy, much less, carry it out to the car. The intimacy of that trophy is renown. I even told my wife at our wedding to hold her bouquet up like she was holding the Stanley Cup.

She just looked at me oddly. And yet, she married me anyway!

Regardless, Steve informed me that these Sabres have never won the cup. Well, fasten your seat belts because there’s a dog who’s about to get this gift very soon… 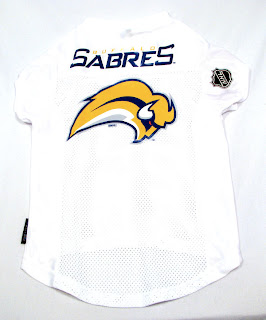 Believe in the power of the Doggie Jersey…

Who’s Got a Prayer in the Super Bowl?