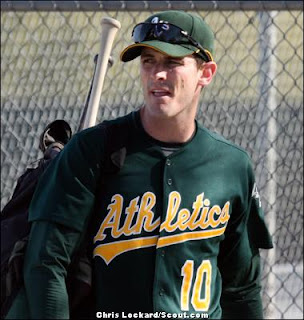 Oakland Athletics prospect Grant Desme is trading in his glove for a collar. So says this article.A snip:

The A’s prized prospect exited the season with a head-turning presence, accompanied by a bat that produced 31 home runs and a speedy 6-foot-2 frame that stole 40 bases in Class A ball — making him the only player in Minor League Baseball to enjoy a 30-30 campaign.

An exceptional performance and MVP honors in the Arizona Fall League followed, so surely Desme was close to getting a call, most assumed — if not for a trip to The Show, then at least for an invitation to Spring Training.

Yet, Desme insists he’d already received the call long before his final at-bat in the fall came and went — the one that would take him to bigger and better places.

It just so happens it wasn’t what the A’s organization — or anyone else, for that matter — had in mind.

The call, Desme announced Friday, came in the form of priesthood in the Catholic church.

“Last year before the season started, I really had a strong feeling of a calling and a real strong desire to follow it,” the 23-year-old said. “I just fought it.”

Thus, Desme chose to play out the season as a test of sorts, “just hoping and praying about it.”

“As the year went on,” he said, “God blessed me. I had a better year than I could have imagined, but that reconfirmed my desire because I wasn’t at peace with where I was at. I love the game, but I aspire to higher things.”

I kinda know how he feels.

While not being good enough to become an athlete, I was good enough to be a broadcaster. For 10 years of my life I tried to give broadcasting a go, with limited success. I produced a lot behind the scenes, did some small on-air things for the stations that I worked for and felt like I was just spinning my wheels. I was a snotty 20 something who thought that I was better than some on the on-air staff (and I can honestly say that I was in certain cases) and didn’t need to go an earn my dues somewhere outside of the world’s biggest media market. Still, that limited success was enough to earn me a spot as a minor league broadcaster in my hometown for the Yonkers Hoot Owls.

And I was pretty good. My partner and I had good banter and people who showed up at the games would tell us that we did a good job. I sent tapes to major league broadcasters for advice and they liked what they heard and advised me to just be patient that my time would come. At the end of that season, I believed that I was a good broadcaster. I had proven to myself that I indeed could be a solid broadcaster.

But I wasn’t excited about it. I complained through most of the season and when one of my high school coaches showed up to take in a game he noticed my negativity. “You look like you could use a break from this season,” he said to me.

Even other radio colleagues noticed my lack of enthusiasm, despite a lot of talent. One even mentioned that he saw my energy rise after a returned from a weekend retreat that I had led with my parish and that he had never seen that side of me before.

So I searched my heart and I found much peace after admitting that I was scared to leave one career for what might lie ahead. Friends encouraged me to seek the advice of others and after meeting with many other ministry professionals my fears began to subside. After meeting with a bunch of major league broadcasters, I found myself less envious of their stature and more excited about making a choice for ministry rather than for something for which I just lacked passion.

So I hope that Grant Desme has a great life in the seminary. I hope he discerns well and that he becomes a good priest. Because we need good priests and more importantly, we need men and women with a passion for ministry.

Let’s all pray for that today.