Haiti: Moving Towards Hope and Away From Pat Robertson’s God 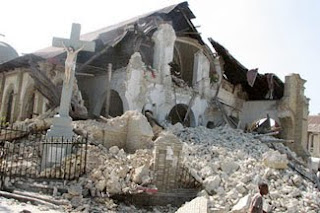 Joe Paprocki, Fr. Rick Malloy and myself collaborated on an article for BustedHalo® responding to Pat Robertson’s comments on the Haiti earthquake resulting from God’s wrath. A snip:

When we look for God in this tragedy we have no further place to look than the faith of the Haitian people — a religious people, to be sure — to give us a glimpse of where God truly can be found. After 11 days, a man named Wismond Exantus was pulled from the rubble, surviving on small snacks and drinks from the hotel’s gift shop that collapsed all around him. When a large group of Haitian people heard about the possibility that someone might still be alive beneath the rocks they gathered somehow, still hopeful, despite all that they had been through.

Would any of us have that same kind of faith?

This is also the faith of the people we see in Scripture. The religious battle, in matters of tragedy, is not between a vengeful God and his faithless creatures; rather, it is between faith and hopelessness. While it is true that Scripture cites examples of God’s response to sin being characterized as wrath, it is also true that often God is also persuaded to relent from unleashing His wrath, as when Moses interceded for the Jewish people after they idolized a golden calf (Exodus 32: 1-14). Throughout the Hebrew Scriptures, God’s wrath and mercy always go hand in hand, with expressions of love, mercy and forgiveness far surpassing those of anger. Despite the popular notion that the God of the Old Testament is an angry God, His own people – Israel – continually characterize God as “slow to anger.” More importantly, Scripture reveals to us that whenever God’s people turn away from their sins, God is quick to show mercy. God is always trying to set the world right, out of love for us, though we never really seem to get it all right anyway.

Hopelessness is the place where the evil one hopes to lead us when disaster strikes and our sins take hold of us. And yet, God stays faithful to Israel, even when they disobey him. Israel in turn, returns to faithful practice, despite their faith being tested by exile and slavery. In the book of Job, Job stays faithful to God, refusing to believe that God would smite him for nothing. This sinless man believed and his glimmer of hope in God’s faithfulness is enough to triumph.

Read more here and continue to pray for those who lost their lives and who try to recover from the earthquake in Haiti.

0 thoughts on “Haiti: Moving Towards Hope and Away From Pat Robertson’s God”