The Gospel According to Blog 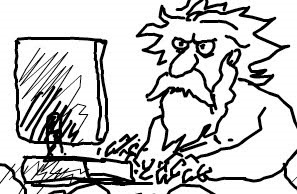 America Magazine’s Fr James Martin, S.J. blogged on the Pope’s Message for the World Day of Communications today in which he essentially encourages us to blog the gospel.

This is an essential message for all those in the Catholic church who disparage new media. About ten years ago I remember speaking with a long-time observer of the Catholic church, and asking why so few Catholic leaders–especially some in the hierarchy at the time–seemed to have so little to say about television. “They don’t watch it,” he said bluntly. It was infra dig. That was pretty shocking, and it reminded me of someone who told me that those who proudly say that they don’t watch television are actually saying that they know nothing about the culture in which we live.

But guess what? That’s where people are congregating today and if we want to emulate Jesus we should remember that he went out to see people, rather than simply letting them come to him. (He did some of the latter, but much more of the former.) The history of Christianity is in large part the history of the church using to great effect the latest media, sometimes even inventing media, to evangelize.

Read the whole thing as Fr Jim essentially gives a history of Saints who use modern methods of communication for their time.

Fr. Frank Desiderio, CSP who ran Paulist Productions for many years once told me that we’re really extending the message of Jesus when we use media. Jesus used the media of his day: itinerant preaching–parables or story telling, if you will. St. Paul was a letter writer and Paulist Founder and now Servant of God, Isaac Hecker was a publisher. So blogs like this one and sites like BustedHalo® are simply doing what Jesus and his followers have always done.

So blog the gospel, facebook the psalms and tweet Catholic social teaching because there is where the message of Jesus needs to be most alive.

A h/t to the Jewish Journal for the pic and to America Magazine.