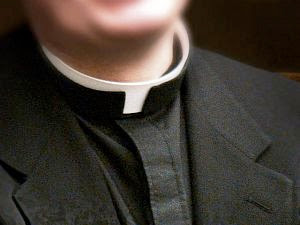 Earlier this week I went to a campus function with Fr. Pat, the pastor of our North Campus. It’s rare that I see him without his collar on, as he wears it often, especially when on “official business.”

We walked into the gross anatomy lab, as I was getting a tour of the facility from Fr. Pat and a young man was getting ready to leave. As we were about to turn the corner the young man stopped us, out of the blue.

Fr Pat turned towards him and the young man broke down in tears within seconds.

“I just found out that my grandma died about an hour ago and I wondered if you would pray with me?”

I excused myself and let Fr. Pat and the young man sit together to talk and pray for a few minutes, sensing that he wasn’t inviting me to prayer but that “the collar” called him towards an identifiable minister.

We just happened to be there that day. But had Fr. Pat not been wearing his collar or had I been by myself, that opportunity would not have presented itself. That symbol of ministry, the symbol of priesthood, the identifiable sign to this young man that said, “I can ask this guy to pray for me…I NEED him” was welcomed and not abhorred.

I could have been the campus minister there all semester, but for those not readily aware of me, or of my position (which I fear is most students, especially in the med school–one because I’m new and two, because many aren’t regular churchgoers) would never have dared to ask me the same question.

Jesus asked us to “go out to all the world and tell the good news” and to “not hide our light under a bushel basket” but for the unaware, or the agnostic, or the sporadic attendee, we all need to be welcome signs of Christ’s presence. For priests an easy way to accomplish this task is to wear the collar. For nuns, a habit perhaps (although most have “kicked the habit”–however many young nuns are trying to be more intentional about wearing theirs and some like the Felician Sisters here wear a very identifiable pectoral cross) does the trick as well. But for us lay ministers…it’s more difficult. I’m pretty vocal about who I am, introducing myself to all I meet as the Campus Minister, but it’s not as easily recognized. I’m considering getting a golf shirt with “campus minister” scrawled on the crest, maybe with a cross? Maybe I wear a cross around my neck over my clothes? Deacons have an identifiable lapel pin, but even that “whispers” their presence, especially to the young. Many deacons like to keep their presence as lay people in a parish and have found that “looking like a lay person” outside of the liturgy often makes them “more approachable” to many. However, I would argue that this is true only to those who are already initiated into parish life. What about when you head off to do prison ministry, or head to the hospital? For deacons, I wonder if their diagonal stole might serve more than a liturgical purpose, even over street clothes?

A friend of mine was a volunteer down at ground zero after September 11th and he reported something similar. That symbol of the priesthood invited him to be a presence for many. When workers found two vertebrae in the wreckage, the priest was immediately found and a makeshift prayer service for those remains occurred–at the workers request.

So I’d like to hear your stories, priests and ministers…for those who wear their collars, tell me the good and the bad of wearing it. For women religious, how do you make yourself present to those you minister to? Campus and other lay ministers, how much harder is this for you? For those in the marketing or fashion field, what might you suggest for us lay Catholic ministers?

Maybe our friend Peacebang, whose blog should be on your must-read list might have an idea or two as well?

Don’t misunderstand….this is not about recognition in terms of haughtyness…but rather it’s about serving the needs of those seeking someone in their time of need. With few priests around and some not wearing collars, I wonder how many opportunities fall by the wayside?