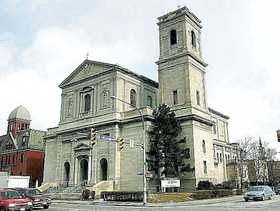 USA Today talks of a church that has decided to up and move from Buffalo to the Southern State of Georgia.

St. Gerard’s was where her grandparents and parents were married, where she was baptized and wore the white dress, shoes and veil of First Communion. Years later, she can still hear the three great bells, still see the ceiling fresco of Mary crowned Queen of Heaven.
Sharon Wilbur took those memories of St. Gerard’s Roman Catholic Church with her when she moved decades ago to suburban Atlanta, where such a church exists only in pictures. Now, two years after it closed, her old church could be following her south.

Instead of building a neoclassical church, Wilbur’s growing parish wants to buy classical-style St. Gerard’s, take it apart and ship it 900 miles from Buffalo’s depopulated east side to Norcross, Ga., for reassembly at Mary Our Queen parish. The parish has the endorsement of the Catholic archdiocese of Atlanta, the diocese of Buffalo and St. Gerard’s former parishioners. All it needs is an additional $10 million. Advocates of the plan to move St. Gerard’s say it could be a template for saving closed church buildings by finding them new parishes in the suburbs or the Sun Belt — “preservation by relocation,” as Mary Our Queen’s website calls it.

The Catholic diocese of Buffalo and most former parishioners describe the plan as the only way to save St. Gerard’s. Buffalo has a glut of closed, empty churches — the diocese alone is trying to sell 22 other buildings — and a small congregation looking for a church probably couldn’t afford St. Gerard’s heating bill.

Historic preservation groups are split over the plan.

Some, such as Preservation Buffalo Niagara, accept the move as a necessary evil; others oppose it as what Tim Tielman, director of the Campaign for Buffalo History, Architecture and Culture, calls “a demolition and salvage operation. They want to harvest our architectural heritage and put it in a box.”

David Franczyk, president of the Buffalo city council, has a message for the Georgia parish: “Build your own church. We have enough vacant lots.”

At first glance, I thought I would agree with Mr. Franczyk. But in fairness, since I am king of fairness, there are reasons that parishes close, mostly because there is not a growing or vibrant community there. Transplanting a building to another locale is not the same as building a parish community. If there is a vibrant community in Georgia then maybe it’s a great solution. Perhaps the issue here is one of substituting the literal sacred space of a building (which, again, in fairness, can be very important) for the creation of sacred space in community with one another and developing that sense of community.

Since I’m new to the community here in Buffalo I looked into why the church closed or I should say merged with another parish in the first place. Buffalo Rising had details:

Following years of declining membership, St. Gerard closed in January, and the parish merged with Blessed Trinity on Leroy Avenue.

The diocese has received no offers for the church, which needs a new boiler, roof repairs and leading for its stained-glass windows — which would total hundreds of thousands of dollars, Keenan said.

Those opposing the idea “need to come up with a plan,” he said. “Give me an alternate plan, and I’m willing to listen to it.”

The Catch-22 in this case is that there are no buyers for the church and that leaves the diocese with choosing between letting a beautiful building fall into disrepair or moving the building and leaving another empty lot in Buffalo (of which there are a-plenty). The lesser of two less-than-ideal solutions may indeed be being employed here.

Thanksgivings Past and Present