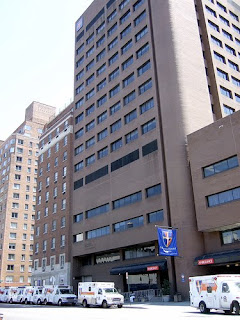 Deacon Greg points us today towards a NY Times headline about St Vincent’s Hospital in Manhattan, the last Catholic hospital standing in NYC. Today that last bastion of Catholic Healthcare in the urban jungle is in danger of closing.

“We are not going away,” said Sister Jane Iannucelli, vice chairwoman of the hospital board, standing in the light of the stained glass windows.

“One of the things that’s so crucial to the Sisters of Charity is serving the poor,” she said after the Mass.

It was that very calling, some industry executives suggested, that may have helped make the hospital obsolete.

“Helping the poor is indeed the mission and the cause célèbre,” said Kenneth E. Raske, president of the Greater New York Hospitals Association, a trade group. “Therein lies the dilemma.”

While other hospitals emphasize high-tech care and rush to invest in the fancy equipment and celebrity doctors that attract patients with the means to pay for them, St. Vincent’s stuck to its motto of “compassionate care,” rooted in its origins as a place that trained nurses and that was under the auspices of nuns.

As the Village changed, becoming home to middle-class and affluent families, by many accounts St. Vincent’s failed to change with it. In 2007, several years after an ill-fated merger with other Catholic hospitals, St. Vincent’s management proposed to begin selling off its maze of outdated buildings around Seventh Avenue and 12th Street to build a new, state of the art high-rise building across the street, to be designed by Pei Cobb Freed & Partners Architects, famous for cutting-edge projects like the glass pyramid expansion of the Louvre museum in Paris and the John Hancock Tower in Boston.

But some said it was too late.

It’s a sin when helping the poor is shoved aside in favor of vanity–for lack of a better term. It seems that money is given to the places with the latest cutting edge tools while meanwhile an underserved population –who is probably unwanted in that neighborhood these days–are left to fend for themselves.

That, in a word, is shameful.