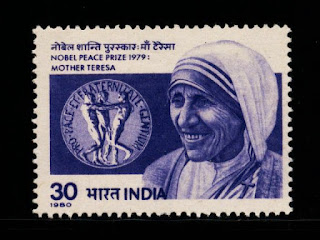 America’s Fr. James Martin and David Gibson at politics daily have two excellent posts today on the argument over whether or not Mother (now Blessed for you, ecclesiastical types) Teresa belongs on a U.S. Postage stamp.

The argument is seems stems from the law stating that “Stamps or stationery items shall not be issued to honor religious institutions or individuals whose principal achievements are associated with religious undertakings or beliefs.”

Fair enough, I suppose. I certainly wouldn’t want to see Pat Robertson or even Joel Osteen on a stamp any time soon.

Fr. Martin points out that both Dr. Martin Luther King was a Baptist minister and Fr. Flanagan of Boys Town were both issued a stamp. Officials say they were not known primarily as “religious leaders.” I’d argue that the deep faith of both men is what drove them to effect secular culture in both of their walks of life. To say otherwise, is indeed to denigrate their religious experience.

Gibson also points out that Mary is on a stamp every Christmas. But I guess she’s not religious either. You could even argue that Santa is really a saint who was a Bishop who provided dowries for the poor of his day.

How many letters do you send a year anyway? And if she doesn’t get on the stamp what’s stopping me from creating my own Mother Teresa stamp on Stamps.com anyway?

Here’s one place where India used their common sense and honored a woman well deserving of a postage stamp–and a whole lot more.

May 9, 2020 godgoogler
Catholics and World Events