Make Gnocci with the Dough You’ve Got 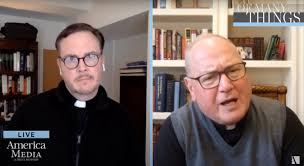 Fr. Matt Malone, S.J. interviewed Cardinal Dolan recently after the prelate came dangerously close to seemingly endorsing President Trump and subsequently finding himself in hot water with many Catholics who felt he should’ve spoken to the President about immigration, NY support, and other issues with which the President is not in line with the church’s teachings as well as for praising him for his leadership at this time. Watch for yourself.

And decide for yourself how you feel about the Cardinal’s interview on Fox News.

As for my own opinion, I think the Cardinal is in a “no-win” situation. He needs federal help for Catholic schools and the President may in fact, be the only one who can grant that to him. Is this (for lack of a better term) a quid pro quo? Unlikely. But I also don’t think that if the Cardinal were more “left-leaning” politically, would I have expected him to go on Fox news (of all places) and rip into President Trump either. Politics, like anything else, is all about relationships. Or at least it should be. One could question this of course, these days and rightfully so. These days, with all due respect, to Cardinal Dolan, it is unlikely that anyone will reach across the aisle on any matter and listen to another opinion. A friend of mine is a fairly established politico and lives in DC and remarked that “in the last 15 years, Republicans and Democrats can’t even drink together anymore and that’s only gotten worse with this administration. Now they won’t even be caught in the same elevator anymore.”

Perhaps the Cardinal should have chosen his words of praise more carefully? He did praise Governor Cuomo and Mayor DiBlasio in the same breath, to be fair…but he seemed a bit over the top in praising President Trump, even for Fox News. But I would say that I’m glad to see the Cardinal working with all of our politicians in trying to get their support for those experiencing poverty that are served by Catholic Charities and those Catholic Schools and Parishes who have been financially decimated by the pandemic. Perhaps, his political savvy will show itself to be a wise “middle ground?”

For Fr. Malone’s similar thoughts to my own, check out his article on this situation. And for another view read his colleague, Sam Sawyer’s thoughts on how Cardinal Dolan’s praise was a “pastoral failure.”