NCR: Young Catholics Accept the Church as It Is 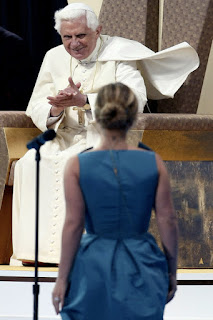 An excellent piece by Tom Roberts in NCR’s Emerging Church Series. He interviews 8 young Jersey City parishioners on their sense of being Catholic. The results seem to surprise him, but are no surprise to me.

“I think the church has to earn parishioners to come,” said Bridget d’Souza, one of the young professionals who joined the conversation in May at Our Lady of Czestochowa parish in Jersey City, N.J.

She was describing a kind of free-market approach to parish selection that applies to groups across generational lines, but particularly to young people without permanent ties to a neighborhood or diocese. No longer can pastors be guaranteed a congregation because of geography. People go where they’re both getting fed spiritually, said d’Souza, and where they can feel ownership of the parish and its activities.

It wasn’t that way growing up in a place, she said, where people owned their homes for decades and where churchgoing was determined by parish boundaries.

The loss of those physical boundaries seems symbolic of deeper lines and categories that have become less distinct when it comes to deciding on the bigger questions: whether to be religious at all and, specifically, whether to be Catholic….

D’Souza and her husband, Devantin, have been members of Our Lady of Czestochowa for three years. Both are cradle Catholics. She grew up in New Jersey, and spent time in the Jesuit Volunteer Corps right out of college. He is from Bombay, India, arrived in the U.S. in 2001 and moved to New Jersey in 2005, they year they were married. They met in business school in Washington and at the time of the interview were working as consultants for the financial firm Deloitte and Touche in New York.

In college, she said, she struggled through a period when she asked herself, “Do I want to be Catholic? Do I want to go into a Protestant denomination?” She said she had felt frustration over issues like the sex abuse and financial crises “that you’re not as empowered as you might be in other areas, like with your civic government for instance.”

She perceives a certain power in the tradition, in the Mass and the Eucharist. “There is something there that his so powerful, and I think the church has nurtured that. I think for me the church embodies that.” In the larger culture she mentioned, Catholic Charities and all the things that the church does. I don’ think most people are aware o that. If they were aware of it, all of these other things that are perceived as negative, they wouldn’t be as proportionally as negative in my opinion.”

Read more here and think about the young people you know…and pray for them.