Yes Fordham, There is a Santa Claus 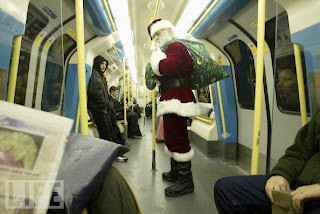 A retroactive Hat Tip to my classmates Joe Squillace and Tracy Crimmins from Fordham University where this story originated at Christmas 1991.

Joe and Tracy were students at Fordham and spent a good deal of their time doing what some would say was a thankless job: Running the Community Service Organization’s “Give A Child a Christmas” campaign. They would gather hundreds of toys by asking the college students to simply go out and buy a toy for children who lived in the poorer section of the Bronx.

The job of organizing and preparing for the huge Christmas party was gargantuan. But Joe and Tracy in the midst of their studies and activities would somehow spend lots of sleepless nights getting all the gifts together and they’d even plan the party that would bring much joy to a bunch of children who were often jaded and skeptical that Santa could ever exist.

Occasionally there would be glimmers that would make it all worthwhile. Like the time when someone donated a huge teddy bear to the campaign. It was one of those huge bears that you win for throwing 150 balls into the clown’s mouth in a row at the fair. They kept that bear unwrapped in the back room thinking it was too “off the charts” in comparison with the other gifts. But when one little girl came forward and said: “There ain’t no Santa Claus and I ain’t even gonna get what I asked for at this stupid-ass party,” Joe sprang into action. “Well what do you want?” he asked. She simply said, “A teddy bear, not that it matters.” Poised in the closet almost magically behind her was the giant bear. And just as magically, Joe, dressed in Santa’s big red suit, asked his compatriot elves to open the door. There stood her bear. Just as she had asked. She hugged that bear longer than I ever had seen anyone hug anything. Pure magic.

But the next story takes the Christmas Fruitcake…

At the end of that very same party, when all of the other students had put in a long hard day’s work, Joe and Tracy gathered up the remaining toys and lugged them all to the subway to bring them down to another children’s home so that they could distribute them to other needy children in the area.

On the subway, after their long journey, Joe and Tracy were enjoying a scenic ride on the elevated #4 train back to Fordham. They spied a little girl of about 5 or 6 years old sitting across from them. A child of the Bronx, she rode the subway with her mother, back home this day. “She had big beautiful eyes,” Tracy told me. “The kind you can’t ignore!” They made pleasant conversation with her.

Tracy: “So are you ready for Santa Claus to come?”
Little Girl: “Nope! Santa doesn’t come to my house.”
Joe: “What? C’mon! What do you mean?”
Little girl (with mom looking nervous): “Well…my mommy told me that the South Bronx is too far from the North Pole for Santa to come all that way. So Santa doesn’t come to our house because it’s just too far, even for flying reindeer!”

Joe and Tracy knowingly looked at the child’s mother and played along.

Joe: “Oh I see. That’s too bad, huh?”
Little Girl: “Nah, it’s OK. I already got my gift from Santa anyway.”
Joe: “Now wait a minute! What do you mean? Santa doesn’t come until Christmas Eve, everyone knows that!”
Little Girl (giggles and says): “I told you silly, the South Bronx is too far! So what Santa does is he gets a bunch of his helpers together at this place called Fordham and every year he makes sure that the gifts get there EARLY. So we get our Christmas a bit earlier than everyone else! We go every year for my gift there.”

At this juncture Joe and Tracy were desperately trying not to openly cry.

Joe asked her one last question:

“Did you get what you want?”

“I ALWAYS get exactly what I ask Santa for!”

And in unison, as they walked out of the subway car, Joe and Tracy responded tearfully together:

As we await the magical season of giving, may we be reminded that God, sometimes might not give us what we want, but always gives us exactly what we need. In fact God holds nothing back from us and gives us his very self.

Addendum: A bunch of my classmates just informed me that Virginia O’Hanlon (yes, THAT Virginia) is also a Fordham graduate. They granted her a doctoral degree sometime after 1912. Surprise, surprise!