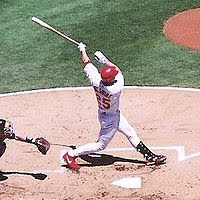 While he’s not exactly breaking a story, Mark McGwire, the baseball-bashing slugger who captivated Major League fans and became the first player to eclipse Roger Maris’ single season home run record announced the news that he was a cheater yesterday. I say that intentionally. While playing with the Oakland A’s and St Louis Cardinals, McGwire says that he took performance enhancing drugs. Some will say that baseball had no rules in place with regards to the substances he took at that juncture, but let’s face facts, McGwire got help and that smacks of insincerity at minimum.

A friend from my radio days spoke to me of an interview he once did with McGwire. McGwire had been an oft-plagued injured player at several points in his career with Oakland suffering from heel and foot injuries. In the interview McGwire mentioned (with a surly attitude, I might add) that he thought that he was a victim of heredity. His numbers were down, he said, because he had bad feet and that it took a long time to recover from those injuries. As someone who also has suffered with heel injuries, I can sympathize, but still, that’s not a good excuse for taking roids.

McGwire repeated that song yesterday. He said he felt he owed it to his teammates and to the fans to get back out on the field as fast as he could. He also mentioned that his teams were paying him a lot of money and he felt he owed it to the management to get back on the field. So he took the drugs to try to recover faster. I believe him, to a point but what McGwire doesn’t realize is that besides healing faster, the dog days of August often makes the bat a bit heavier because of the long grind of the season that takes its toll on everyone. With steroids, there are no dog days of summer.

Some will say that admitting his mistake is admirable. He certainly didn’t come completely clean when he testified in congress. Others will say that we all knew he was on the juice back when he was playing and we just didn’t want to know the truth. Others will claim that we just don’t care about drug use and we all just want to see good baseball. And even others will state my earlier claim: baseball had no rules on the juice then, so McGwire didn’t break any rules that were on the books.

And that is a bunch of horsefeathers. And a look to baseball’s past tells us why.

A consequence of any sports’ season is that players get hurt and that many of them play hurt. I once asked Phil Rizzuto, the hall of fame Shortstop and a character in the broadcast booth for years for the Yankees, if he ever played hurt. He said he played hurt almost every year because he was afraid someone else was ready to take his spot. “I threw some dirt on my leg and moved on. We all did that unless we thought we’d hurt the team.”

Rizzuto mentioned a second and more important reason why anybody who played in the non-steroid era should blanch at McGwire’s lame-excuses today. That reason is the following statement: “We wanted to make the post-season every year because we needed the money! None of us wanted to have to work in the offseason.”

And McGwire took drugs to keep a much larger paycheck. If he was hurt and felt that badly about it he could have done the admirable thing and simply gave the money back–or even donated it to charity–a opportunity that he still can do. I haven’t heard one of these roid users even suggest that they might donate or even return all, or even some, of the money they earned during the steroid era because they weren’t honest with the fans and have damaged the integrity of the game. McGwire is just another greedy fatcat, who longed to inflate his numbers to gain fame, prestige and of course money.

Why did McGwire come clean? Very simple, he fears that he has damaged his chances of making baseball’s hall of fame. He’s failed to garner even 25% of the votes of the writers over the last four years. He won’t have too many chances left and he needs to boost that total quickly. It’s the latest ploy, begging forgiveness in an insincere manner. Much like the rich man who didn’t let Lazarus eat scraps from his table, McGwire isn’t asking for forgiveness here. He is asking for pity. It’s all about McGwire and not about integrity.

Mr. McGwire, I loved seeing you play. How about you return some money to the Cardinals and A’s? How about even using your fame to help promote steroid awareness in high schools and colleges because God knows you’ve caused enough damage to younger athletes already? How about you ask Major League baseball to place an asterisk next to all of your records during the years that you took performance enhancers? How about admitting that you were greedy for fame, money and records that you did not rightfully earn?

If you did that, your request for forgiveness might come from a more sincere place. One of the first rules of going to confession is to admit your sins with honesty and humbleness and then to do some kind of penance. Perhaps that’s a lesson that Mr. McGwire needs to recall?

Who’s Got a Prayer in the Super Bowl?